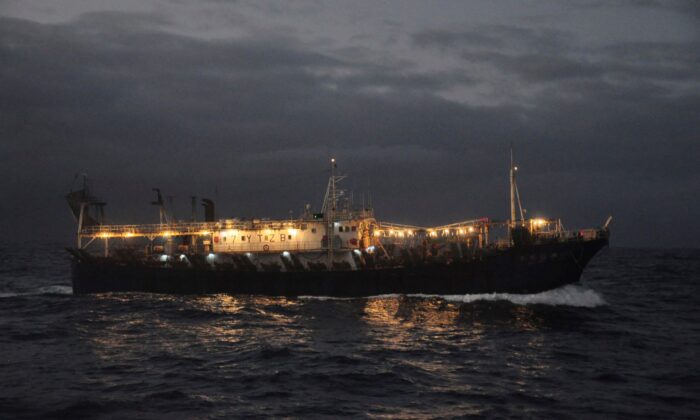 MIAMI—Chinese squid vessels were documented using wide nets to illegally catch already overfished tuna as part of a surge in unregulated activity in the Indian Ocean, according to a new report by a Norway-based watchdog group that highlights growing concerns about the lack of international cooperation to protect marine species on the high seas.

The report, published Wednesday by Trygg Mat Tracking, found that the number of squid vessels in the high seas of the Indian Ocean—where fishing of the species is not regulated—has exploded six-fold since 2016.

The vast majority of the vessels sailing in the high seas off the coast of Oman and Yemen were flagged to China, whose overseas fleet, the world’s largest, has been dogged by accusations of illegal, unreported, and unregulated fishing around the world.

Behind the surge is a lack of oversight and decades of overfishing that has pushed China’s overseas fleet—officially capped at 3,000 vessels but possibly consisting of thousands more—ever farther from home.

Unlike in other parts of the high seas, where countries come together to jointly manage fishing grounds beyond any country’s territorial waters, there’s no such organization regulating the squid caught in the Indian Ocean.

TMT, relying on ship tracking data and an at-sea survey by Greenpeace International, found that all of the squid vessels were fishing with large nets—a practice considered far more harmful than using lures known as jigs because it generates bycatch of non-targeted species.

Among the other fish tangled in the vessels’ nets and spotted on board by drones were large species of tuna—a slow-maturing, top predator whose disappearance can indicate a dying ocean. None of the 341 vessels detected operating in the area this season was authorized to fish for tuna by the Indian Ocean Tuna Commission, or IOTC, which regulates the catch on the international waters.

Adding to the concerns, TMT said five vessels active in the area later called into a port in Pakistan with 30 metric tons of skipjack and yellowfin tuna, whose population the IOTC is trying to rebuild after years of overfishing.

Another indication of illegal fishing: a significant number of vessels were sailing ‘dark,’ with their mandatory tracking device that gives a ship’s position either switched off, transmitting intermittently, or providing false identifiers.

Some of the same Chinese vessels highlighted by TMT had a history of illegal activity in other parts of the world and were spotted on satellite drifting close to the boundaries of Oman and Yemen, where they did not have permission to fish.

They are also known to fish for squid in the Pacific Ocean off the west coast of South America, where The Associated Press this summer observed similar tracking device discrepancies.