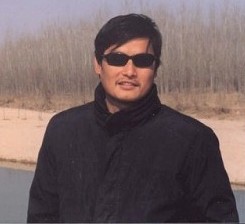 CHINA—Blind human rights activist Chen Guangcheng will be retried on Monday, November 27. Chen's defense attorneys are still worried that witnesses will be blocked by local authorities from appearing in court to testify.

Earlier this year, Chen Guangcheng was illegally sentenced, according to the appeals court, to 4 years and 7 months imprisonment for exposing the local authority's violent birth control practices and its brutal abuse of women.

Chen's defense attorney Li Fangping has arrived in Yinan, Shandong Province, and successfully met with witnesses. Li also met with Chen without any interference last Friday. Chen's other defense attorney, Li Jinsong, ended his trip to the United States early and rushed to Yinan to prepare for the trial.

The court session for Chen's case was originally scheduled for November 20, at Yinan County Court, but the Yinan Court postponed the trial without any explanation and then suddenly announced that the court session would reopen on Monday, November 27. Chen's attorney only managed to obtain witnesses' testimonies and dossiers on Friday, November 24.

Currently, all witnesses received a notice from the Court to appear at the trial. After Li Fangping received notice of the court session on November 22, to avoid being blocked by local authorities from entering the village to meet with witnesses, he and his assistant took side roads in the early morning of last Thursday, to enter Dongshegu Village. Li successfully met with important witnesses Chen Guangdong, Chen Guang, and a few others. All of them expressed their willingness to appear in court to testify.

Li Fangping said he had heard complaints from a few witnesses that when summoned by law enforcement officials, they exerted pressure on them not to appear in court.

Li said the meeting with Chen lasted approximately one hour. Chen was very pleased that his case had been sent back from the appeals court for retrial. He felt that he would get a good verdict if the judicial panel was independent, and would give him a fair verdict.

Li said, “In the meeting, a policeman was present, others came in, on and off also. Basically, they interrupted the meeting only a couple of times.”

Chen's Family Worried About Being Blocked from Appearing in Court

Chen's wife Yuan Weijing also received a notice to appear in court, but she doubted if she could go without interference because she was still under house arrest by the local authorities.

Yuan said that there were still 36 people taking turns watching her. She would know on the day of the retrial whether she could go to court. According to her past experiences, whenever there was a court session or when the lawyers came to visit her, the police would take her away. Yuan said that she has no freedom, and she feels a fair retrial would be unlikely.

Yuan has been under house arrest for more than one year.

In this retrial, whether the Yinan Court can avoid the injustice that happened in the first trial will be the focal point.