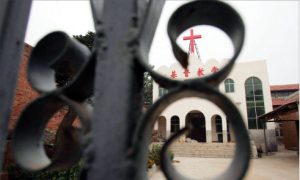 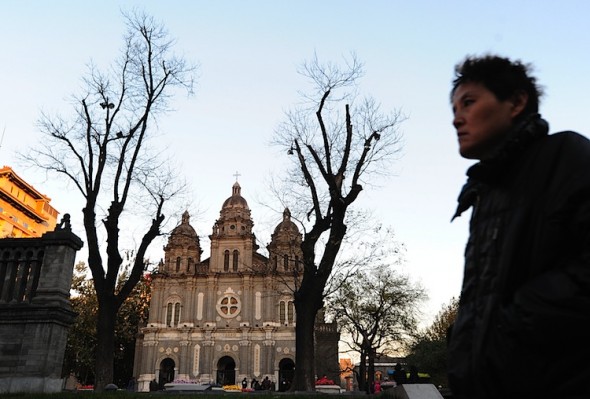 Shanghai Bishop Joseph Fan Zhongliang, of the unapproved Roman Catholic Church, died Sunday at age 97, under house arrest since 2002. Here, a man walks past the state-sanctioned St. Joseph's Catholic Cathedral in Beijing. There are two Catholics churches in China: the officially sanctioned, Communist Party-controlled one, and an unofficial 'clandestine' Roman Catholic Church that is loyal to the pope and the Vatican. (Frederic J. Brown/AFP/Getty Images)
China

At the age of 97, Joseph Fan Zhongliang, the Vatican-approved Bishop of the Diocese of Shanghai, died in his apartment on Sunday evening.

Before removing his body to a funeral home, officials allowed a small Requiem Mass to be said in his apartment, but have refused a funeral at St Ignatius Cathedral.

He was ordained Bishop of Shanghai by Pope John Paul II in 2000, an act not recognized by the Chinese Communist Party (CCP), which severed China’s diplomatic ties with the Vatican in 1949. The break in diplomatic relations resulted in two Catholic Churches in China, the Roman Catholic Church and the CCP-approved church, overseen by the Chinese Catholic Patriotic Association (CCPA).

Following his ordination, the regime immediately placed Fan under house arrest, which remained in force until his death, and instead appointed Aloysius Jin Luxian as Bishop to the state-approved Catholic Church. In 2005, the Vatican recognized Jin as Fan’s Apostolic Administrator, and the two worked together in the Catholic community. Jin died in 2012, and the authorities ceased recognizing the legitimacy of Bishop Fan at that time.

Shanghai has been without a state-approved bishop since Jin’s death. Thaddeus Ma Daqin, who was acceptable to both the Vatican and the CCPA, was to be ordained Bishop of Shanghai in April 2013. But Ma shocked the world when he announced during his ordination Mass that he would be resigning from his all his positions within the CCPA. He was placed under house arrest after officially being stripped of his CCPA posts, and later sent to Beijing, leaving only Vatican-approved Fan as Bishop.

Fan became a Jesuit 1938 and was ordained a priest in 1951. In 1955 Fan, along with Bishop Ignatius Kung Pin-Mei of Shanghai and several hundred other priests were arrested for defying the Communist Party and later convicted of “counterrevolutionary activities.” He was sentenced to a 20 year term in 1958 and sent to a labor camp in Qinghai Province. He remained in Qinghai after his release and taught high school.

He was ordained Coadjutor Bishop of Shanghai by the Bishop of Qinghai in 1985, while Bishop Kung remained imprisoned.

Throughout his years as Bishop, Public Security Bureau officials harassed him, freezing his bank account in 1992, and 1997 confiscating his bibles, liturgical books, and money that supported the Roman Catholic community in Shanghai.

Bishop Fan was one of the last, if not the last remaining, Roman Catholic priest to have lived through the Communist Party’s takeover of China.