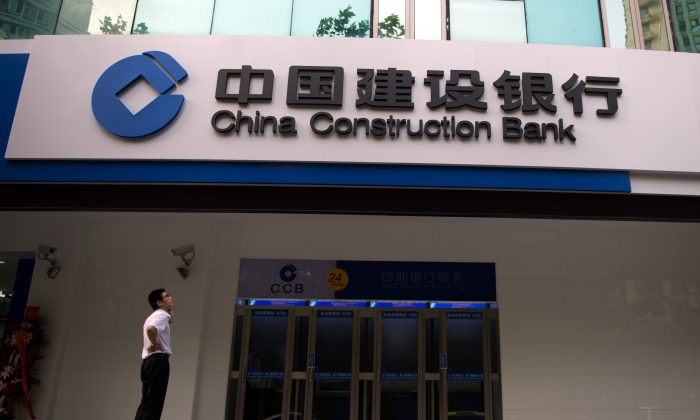 A photo taken on Aug. 28, 2014 shows a branch of the of the China Construction Bank in Shanghai. (Johannes Eisele/AFP/Getty Images)
China

The “Big Five” Chinese banks are setting up subsidiaries to buy and manage debt-to-equity swaps, realizing a directive from Beijing earlier this year aimed at resolving a burgeoning debt problem at state-owned enterprises.

The Agricultural Bank of China—the nation’s third largest by assets—said in a filing with the Shanghai Stock Exchange last week that it would set up an asset management company (AMC) arm to undertake debt-to-equity swaps. In fact, all five Chinese banking giants plan to set up asset management companies to facilitate such swaps, insiders told mainland financial media Caixin.

China’s debt-to-equity swap program allows banks that hold debt in state-owned enterprises (SOEs) to convert such debt to equity in the company. In theory, it brings a host of benefits to both the banks and the debtors.

For banks, their balance sheets are cleared of such debt, which should free up capital from having to reserve against non-performing loans (NPLs), and their NPL ratio—a key metric measuring the viability of a bank’s loan portfolio—should also decline. For SOEs, they enjoy lower debt burden, which could free up cash flows and delay further restructuring or bankruptcy.

But in practice, the plan seems little more than another creative way to pass risk from soured loans from state-owned banks onto pensioners and investors.

The debt-to-equity swap program has long been expected as a way for Beijing to lessen China’s overall debt burden, but the exact form it will take has been nebulous until now. The State Council (China’s Cabinet) issued official guidance in early October, and banks were called to Beijing to be briefed on details.

This is China’s second round of setting up AMCs, also known as “bad banks.”

The AMCs bought loans from banks, freeing up capital for banks to extend more loans to SOEs. They were given ten-year loans to finance the asset purchases and were supposed to go away after winding down the NPLs in ten years. But today, the AMCs not only are still around, they’re getting larger and seeking initial public offerings of stock.

Today, Beijing’s new wave of AMCs will not hold NPLs directly, but manage the equity converted from the debt. Each new AMC will be capitalized with 10 billion yuan ($1.5 billion) to start, and will purchase the NPLs from banks, work with SOEs to restructure the debt into equity, and managing them before disposing of them with regulatory approval.

For an idea of how the debt-to-equity swaps will likely work, let’s examine a deal completed on the heels of the State Council announcement last month.

The Yunnan Tin swap, which was not done under the new AMCs the banks are readying, would be managed by a new fund set up jointly by Chinese Construction Bank and Yunnan Tin with capital from other investors.

The bank disclosed that any debt of Yunnan would be purchased at par, meaning face value with no discounts.

That alone should raise red flags. Yunnan Tin isn’t a viable company, generating 6 billion yuan of net losses over the last three years. Under these assumptions, there’s little evidence that Yunnan Tin’s debt should be valued at par (face). In a true market scenario, investors would know that they would be unable to recover much of the debt, and so they might only be willing to pay pennies on the dollar.

“The pricing of the debt raises doubts over whether the swap is really carried out in line with market disciplines,” Liao Qiang, a senior director at Standard & Poor’s, told South China Morning Post in Oct. “There is a contradiction here. If the debts are absolutely normal, [then] why does the company need a debt for equity swap?”

Most likely, Beijing doesn’t want state-owned banks to take losses as part of the debt-to-equity swap program. So who’s on the hook for potential losses?

China Construction Bank was quick to point out that cash outlay from the bank was minimal. In fact, most of the 10 billion yuan capital for the fund would come from other investors such as foreign institutional investors, the National Social Security Fund, pension funds, state-owned AMCs, and other wealth management products, according to details from the bank.

The rate of return for investors into the Yunnan Tin fund was marketed as between 5 to 15 percent. However, returns are not guaranteed and investors will take most of the losses. And here’s the kicker: Lian Weiliang, deputy director of the National Development and Reform Commission, told reporters in October that authorities expect little to no government intervention, and absolutely no financial guarantees will be issued with respect to the debt-to-equity swap program.

Lost in the complex financial shuffle is a simple fact that debt or equity, a financial instrument in a money-losing bankrupt company, is still worthless, or worth very little. It’s hard to envision a scenario—Ponzi-like investor structures notwithstanding—where investors of the new AMCs can recover their money, let alone pocket returns of 5 to 15 percent.

For Beijing, there seems to be little to worry about. The banks won’t lose money; the NPLs will be sold to the AMCs at face value, and subsequent losses will be borne by investors of the AMCs.

And therein lies the brilliant cunning of this plan. In one fell swoop, Beijing has shifted the risk of owning piles of NPLs from the state banks onto unsuspecting retirees, foreign investors, and once the AMCs announce their IPOs—household investors.