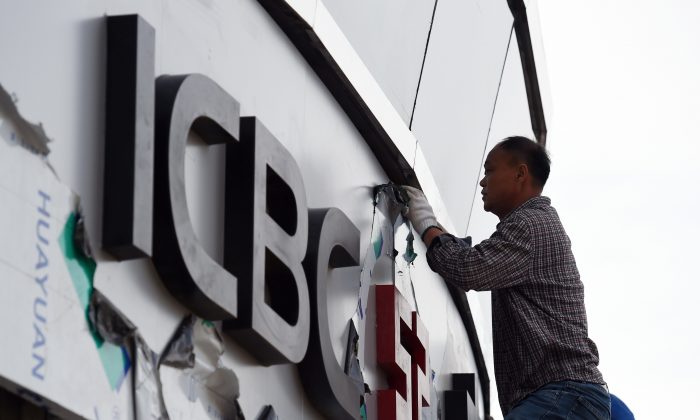 A worker installs sign outside a branch of the Industrial and Commercial Bank of China (ICBC) in Beijing. (Greg Baker/AFP/Getty Images)
China

Amid a backdrop of souring loans and diminishing reserve ratios, Chinese banks recently announced the least encouraging quarterly earnings in almost a decade.

Facing a challenging domestic and international economic environment, the banks’s underlying profits are deteriorating. The rising figure of official and nonofficial toxic loans is evaporating reserves and without drastic cuts to minimum reserve requirements, all but guarantees future losses.

It may be time to say goodbye to the industry’s string of quarterly profit increases and 10 percent dividend yields.

For years, Chinese banks managed earnings by adjusting provisions for bad debt that have been comfortably above the regulatory minimum. That threshold sits at 150 percent of existing nonperforming loans (NPLs), which Beijing lowered from 200 percent to help banks’s bottom lines and free up capital.

A Loan by Any Other Name

China’s official bad loan ratios sit between 1.5 percent and 2 percent at major banks. That figure is widely recognized as understated—even the most bullish investors peg the true NPL ratio to be in the high single digits.

Charlene Chu, partner at Autonomous Research Asia and head of its China banks research group, estimates that NPLs are as high as 22 percent systemwide, according to a recent interview with Barron’s Asia.

The discrepancy between these figures—and what makes calculating China’s NPL proportion so difficult—lies in what one considers to be debt. Chinese banks and regulators, and many mainstream Western research firms, analyze NPLs within a bank’s loan portfolio.

Nobody wants to be the first to report a profit decline after so many years of growth.
— Richard Cao, Guotai Junan Securities

But for China, a large amount of credit resides outside that scope, in the form of wealth-management products (WMPs). WMPs are a catchall for financial instruments that may reside on or off balance sheets to provide new financing or to service existing debt.

These products are structured differently than loans, which utilizes the bank’s existing balance sheet. In a typical product, the bank contributes capital to a partnership entity with non-bank counterparties such as securities firms or investment trusts, to issue credit to a struggling company. Instead of a loan, the bank holds an investment in an unrelated partnership.

Such financial engineering allows banks to dress up their balance sheets. Loans masquerade as investments, which have a lower risk weighting than debt under Chinese capital adequacy rules, allowing the bank to report a lower NPL ratio and set aside less reserves.

Such WMPs are often the only credit available to “zombie” state-owned enterprises facing restrictions on formal borrowing, such as those in the steel, cement, and manufacturing industries.

Autonomous believes that total outstanding WMPs grew 57 percent in 2015, with off-balance-sheet WMPs up 73 percent. “If WMPs grow just 25 percent to 30 percent this year, they will be twice as big as the combined amount of structured investment vehicles and conduits that blew up on Western banks during the global financial crisis,” Chu said.

The banks, meanwhile, struggle to meet even the official NPL reserves on their books.

To eke out a first-quarter profit gain, two of the four largest state-controlled Chinese banks had to lower bad loan provisions on March 31 to below the regulatory minimum.

Bank of China’s and Industrial and Commercial Bank of China Ltd.’s (ICBC) buffer has fallen to 149 percent and 141 percent, respectively. China Construction Bank is slightly above at 152 percent. The bank with the most NPLs, Agricultural Bank of China, has a coverage ratio of 180 percent.

“The regulator is probably tolerating such a temporary breach and a cut in the ratio is on the way,” Hou Wei, a Hong Kong-based analyst at Sanford C. Bernstein, said in a Bloomberg report. Nomura research indicates that China’s reserve ratio could be cut from 150 percent to 120 percent without material risk to China’s financial system.

During the recent earnings disclosure, China Construction Bank Chairman Wang Hongzhang said that it was possible that the reserve ratio may be cut to between 120 percent and 130 percent, but qualified that statement by saying the degree of ratio cuts may not be standard across the industry.

The temptation is there. According to BNP Paribas research last year, a small cut of minimum reserves of 10 percentage points would boost bank earnings by 7 percent across the industry.

Cutting reserves is a double-edged sword. It can boost earnings and allow a bank to lend more, but it weakens the bank’s capital and its ability to withstand loan losses—which are on the rise.

The official NPL ratios are at their highest levels in several years. At this point, relaxing loan reserve ratios in the face of deteriorating asset quality sends a bad message and puts into question the intention and role of Chinese regulators, a Fitch Ratings note suggested in April.

But even if Beijing cuts reserves down to the 100 percent level pre-financial crisis, is it enough? If the current ratio of official NPL more than doubles to 4 percent or 5 percent, loan losses would carve into banks’s retained earnings and tier-one capital, estimates Sanford C. Bernstein.

“For the first quarter, [the banks] can still maneuver a bit by cutting costs here and there, and end up with zero profit growth and still maintain the minimum NPL coverage ratio—but for the full year nobody can achieve both,” Richard Cao, analyst at Guotai Junan Securities in Shenzhen, told Bloomberg.

“Nobody wants to be the first to report a profit decline after so many years of growth,” Cao added.

But they may not have a choice. Quarterly earnings and dividend levels—which the banks hold sacrosanct—will be cut.

After all, nobody wants to be the first to trigger a global financial crisis either.