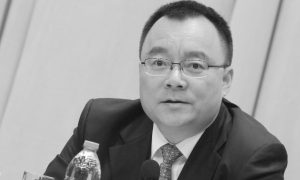 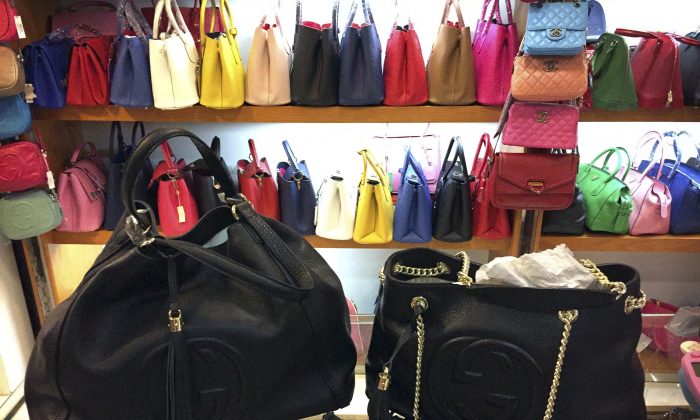 Counterfeit bags are on display in a showroom in a popular Beijing shopping mall on March 11, 2015. China's economy will need to focus on innovation instead of counterfeiting in order to grow, says Zhang Weiying. (AP Photo/Mark Schiefelbein)
China

SHANGHAI—Kim Sbarcea knew exactly what she wanted. She typed “Tiffany Elsa Peretti mesh earrings” into Google and scrolled through impeccable photos of the delicate $450 diamond-shaped earrings until she chanced upon a pair for—deal of deals!—$32.

The website, tiffany-outletsale.com, looked legit and Sbarcea assumed Tiffany & Co. wouldn’t let an unauthorized site use its name. Besides, she could pay by credit card.

She hit the buy button.

In that instant, on a Saturday morning in 2011, Sbarcea’s $32 was sucked from the living room of her house in Christchurch, New Zealand, into the global counterfeiting market. The money trail left by counterfeiters almost always leads to China, where banks have emerged as key conduits in an illegal industry that by one estimate is expected to be worth $1.8 trillion this year.

At least three prominent Chinese banks serve as safe havens for counterfeiters, who use them to process credit card payments for fakes or move their money around the globe, The Associated Press has found. A review of hundreds of pages of court documents from cases in the United States and China—along with interviews with lawyers, investigators, government officials and industry representatives—shows that a lack of legal cooperation between the West and China is allowing counterfeiters to use Chinese banks as financial shelters.

Recent attempts by U.S. and European companies to follow counterfeiters’ money into China have hit a wall, frustrating efforts to deal a more decisive blow to the global trade in fakes, which has endured despite years of raids.

Five lawsuits filed in the U.S. against counterfeiters reveal a pattern to how they use Chinese banks to move money beyond the reach of U.S. law enforcement. Counterfeiters sold fakes online in the U.S., using credit cards or PayPal to process payments. Then, records show, they transferred millions of dollars in illicit earnings to accounts at two of China’s largest state-owned banks, the Bank of China and the Industrial and Commercial Bank of China—as well as the smaller China Merchants Bank.

Nearly nine out of every 10 fakes seized at U.S. borders come from China or Hong Kong.

The banks do not dispute that the accused counterfeiters held accounts at their branches, but they refuse to comply with U.S. court orders to disclose information or freeze the funds, saying that would violate Chinese bank secrecy laws. They say they do not support counterfeiting, have broken no laws and are caught in a jurisdictional dispute between China and the U.S.

Tiffany & Co. seeks $58.5 million in damages in a New York federal court from an online counterfeiting ring that spans three continents. Tiffany said it traced PayPal transfers to five accounts at the Bank of China, ICBC and China Merchants Bank, and also found that the Bank of China was processing credit card payments for one defendant. A Latvian bank handed over details about the illicit money flows, but the Bank of China refused to cooperate, U.S. court documents show.

Two more lawsuits were filed by the U.S. Justice Department, which traced millions of dollars in online sales of counterfeit sports jerseys to Bank of China and ICBC accounts in China. Tiffany filed a fifth lawsuit against another group of counterfeiters.

It’s not surprising that Chinese banks would be a natural choice for counterfeiters: According to the latest U.S. Department of Homeland Security data, nearly nine out of every 10 fakes seized at U.S. borders come from China or Hong Kong.

In New Zealand, Sbarcea’s earrings arrived in the mail in a Tiffany-blue box that was, on second glance, not quite the right shade. Inside was a cheap plastic container with a pair of earrings that didn’t look much like the Elsa Perettis she wanted. They felt, she said, as if they were made of tin.

Sbarcea fired off a barrage of angry emails. She refused to return the earrings at her own expense, as the company demanded, and instead fought for a refund of the $11 shipping fee, which was supposed to be free.

Kim Sbarcea never got her money back. Her Elsa Peretti mesh earrings sit forgotten in a closet. “Such rubbish!” she wrote in an email. “Never wore the earrings.”