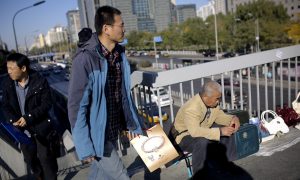 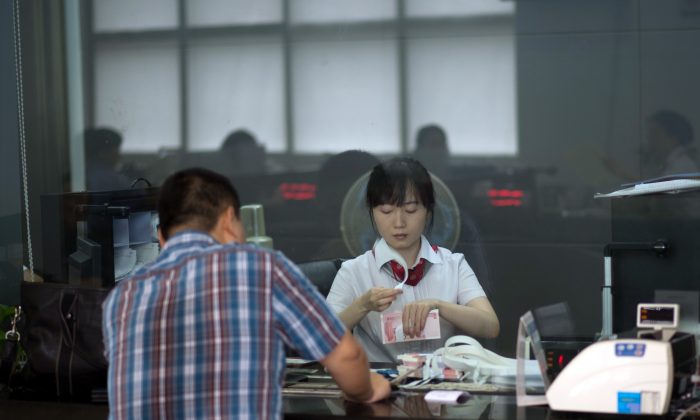 A worker of an Industrial and Commercial Bank of China Ltd (ICBC) branch counts money as she serves a customer in Shanghai on Sept. 24, 2014. (JOHANNES EISELE/AFP/Getty Images)
China

Banking scams, fake banks, naked robbery of hundreds of millions of yuan—all are dismissed by the Chinese regime’s banking authorities as “isolated incidents.” Victims don’t believe that, and across multiple provinces the state banking fraud has victimized individuals and corporations alike.

According to reports by the China Banking Regulatory Commission and local police, account holders in many provinces including Zhejiang and Anhui in the east, Henan in central China, and Hunan in the south-central part of the country, have mysteriously lost savings kept in China’s state-run banks.

In February 2014, a man identified as Zhang found that his account with the Hangzhou United Bank had been virtually emptied of its contents—over 2 million yuan (US$320,000). After consultations with the bank, Zhang discovered that the money had disappeared soon after he made the deposit.

Zhang was only one of forty-some fraud victims, who had been robbed of 95 million yuan by the Hangzhou bank. Official investigation found that the perpetrators bribed bank workers to trick the account holders into making deposits that would then be stolen.

Mr. Liu, from Yiwu County in Zhejiang Province, deposited about 2.5 million yuan in the Ningbo and Fenghua sub-branches of a state-run bank. In 2013, he found only 4 yuan left in the accounts, according to a report by the Chinese paper National Business Daily.

Neither are private firms safe from such fraud. According to official reports, last October and on Jan. 9 the liquor company Luzhou Laojiao lost 500 million yuan to bank theft. The thieves worked from the China Agricultural Bank’s Changsha sub-branch and the Nanyang branch of the Industrial and Commercial Bank of China, which is the world’s largest by total assets.

In its annual inspection of accounts, the Wuhan-based Dongfeng Motor corporation discovered that 100 million yuan (US$16 million) of its assets had vanished, as reported by the Beijing News. Bank personnel, colluding with outsiders, had committed the theft.

Li Zhiyong, a securities company manager in Wuhan, cooperated with workers from six different banks to make fake investments. He was able to siphon off 630 million yuan from ten Chinese state-run workplaces.

In at least one case the bank itself was a fraud. On Jan. 23, the Chinese online news service NetEase reported that the so-called “Rural Economic Special Cooperative,” based in Nanjing, had duped 200 victims into giving up 200 million yuan by posing as a state-run bank.

Because the policies of Chinese banks usually force the account holder to shoulder responsibility for his or her assets, Guangzhou lawyer Shi Wenyu said the victims’ chances of retrieving their savings are virtually nil.

Reinforced by the one-party state’s atmosphere of unbridled corruption, and given the apparent lack of concern by the relevant authorities, there is little sign that the fraud will be comprehensively dealt with anytime soon.

On Jan. 23, Pan Gongsheng, vice-president of a state-run bank, offered reassuring words in saying, “these incidents should not have happened, but currently they are extremely isolated cases.”

China’s netizens are not buying Pan’s take on the situation.

“There are absolutely no specific measures or prevention programs in place.” one comment reads. “When will they finally stop investigating, and step up to protect the account holders? The Banking Regulatory Commission is trying to hide its failure to perform its duties.”

“Whether its Pan Gongsheng or the Regulatory Commission vice-chairman Wang Zhaoxing, is there any difference in the garbage they spout?”

“Doesn’t the Regulatory Commission take any responsibility? As this new year begins, not even money stored in the bank is secure.”

“They’ve talked quite a lot, and stress over and over again the need for strict investigation and improvement. But they won’t admit that our money is gone.”

A sorrowful bank customer sums up the situation: “We entrusted you with our money. If it is taken by anyone other than the account holder, you need to replace it!”