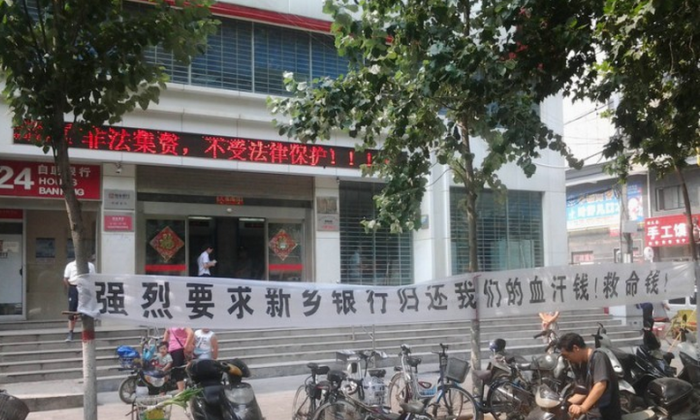 Victim depositors hoist a banner in front of the Bank of Xinxiang in Xinxiang City of Henan Province, in August. Zhang Li, a branch president at the bank, borrowed huge sums from depositors and committed suicide when the loans went bad. (Screenshot/Tianya.cn)
China

Depositors at the bank have begun protesting to get their money back, though the bank says it’s not responsible for any losses they’ve incurred.

Zhang personally oversaw loans to the tune of up to a billion yuan (over one hundred million dollars), gaining the agreement of lenders on the promise of guaranteed high returns.

The Bank of Xinxiang confirmed recently that Zhang’s death in July was due to suicide, according to Chinese magazine Money Week on Aug. 25.

The bank is a local joint-stock firm established in 1997, in Xinxiang City of Henan Province; the city Finance Bureau holds 24.96% of the shares.

He would use the official bank seal and sign his name as guarantor on the contracts. He promised great interest rates.

At least 100 million yuan ($16.24 million) had been borrowed by Zhang by this February, and 11 depositors have been identified, and confirmed to have loaned money to Zhang. There are likely many more, though.

“We lent money for the sake of Bank of Xinxiang and Zhang Li as the bank president,” an anonymous depositor told Money Week.

The bank has insisted that Zhang’s loans were his individual behavior, unrelated to the bank’s business. They refused to take on the losses.

Zhang would have the depositors transfer their money to private accounts—not those of the company or Zhang himself—and then, it is presumed, use it for loan sharking.

“Technically, the lenders absolutely can identify that the branch bank signed contracts with them, because the contracts were signed by the legal representative and stamped with the official bank seal,” a lawyer told Money Week.

He added, “It’s very common that the official seal is controlled by the legal representative, especially in small companies.”

Victims learned of Zhang’s death in July, when they stopped receiving interest payments.

An internet user, identifying herself as a victim, posted to the Chinese social media forum Tianya: “Nearly 500 million yuan ($81.2 million) from over 200 people was stolen. That’s money hard-earned through our lives … Now Zhang Li has committed suicide, and the Bank of Xinxiang won’t take responsibility for the loss.”

The victims have held protests, but police simply break up the events and take away the participants. Depositors say that local public security authorities are not interested in pursuing the case.

Similar scandals have been reported at the same bank this year. In June, another branch president illegally transferred 18 million yuan ($2.9 million) out of an account by faking a personal seal, used to authorize transactions. And in July, yet another Xinxiang Bank branch head embezzled 19.5 million yuan ($3.2 million) from the account of a local firm.