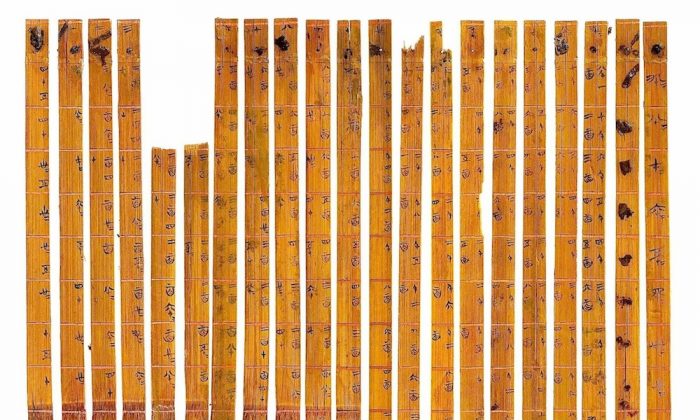 Chinese scientists aligned fragments of bamboo with writing on it to recreate a decimal multiplication table used 2,300 years ago. (Research and Conservation Center for Excavated Text/Tsinghua University)
China

Scientists in China have aligned fragments of bamboo with Chinese calligraphic writing on it to recreate a mathematical device used 2,300 years ago, making it the world’s oldest known decimal multiplication table.

In 2008, the researchers at Tsinghua University in Beijing received almost 2,500 decrepit bamboo strips from a donor, who had bought them at a market in Hong Kong. They date back to about 305 B.C. from the Warring States period before China was unified in the Qin Dynasty.

Each strip was around 0.3-0.5 inches wide and up to 20 inches long with a vertical line of calligraphy in black ink.

Twenty-one of the strips were marked with only numbers, and formed a matrix structure when arranged correctly. The top row and right-hand column contain the same 19 numbers (from right to left and top to bottom–0.5, the numbers 1 to 9, and multiples of 10 from 10 to 90.

“The strips were all mixed up because the strings that used to tie each manuscript together to form a scroll had long decayed,” said researcher Li Junming, according to the journal Nature, adding that it was “like putting together a jigsaw puzzle” because some parts were broken and others were missing. “It’s effectively an ancient calculator.”

The matrix can be used in several ways, for example the entries where each row and column meet are the results of multiplying those numbers, and any whole or half integer between 0.5 and 99.5 can be calculated.

The team think the system may have been used by officials to calculate land surface area, crop yields, and taxes. “We can even use the matrix to do divisions and square roots,” historian Feng Lisheng told Nature. “But we can’t be sure that such complicated tasks were performed at the time.”

“Such an elaborate multiplication matrix is absolutely unique in Chinese history,” he added. Previously, the earliest known Chinese tables were used during the Qin Dynasty from 221 to 206 B.C.