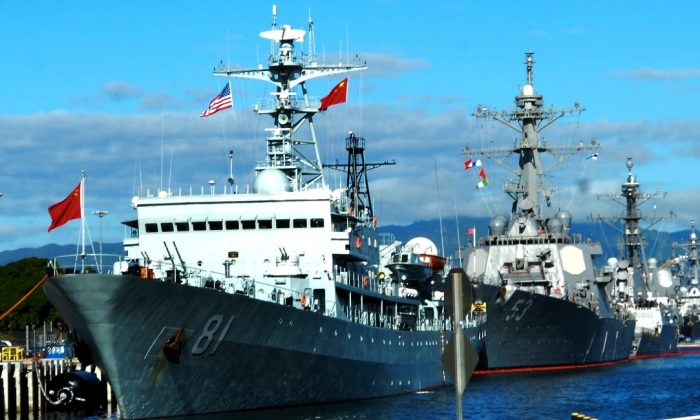 As the United States continues to struggle with adequately funding its armed forces, other nations around the world are developing impressive military capabilities.

Case in point: In a recent article published by The Guardian, China is set to deploy nuclear powered ballistic missile submarines, or what many in the naval community affectionately call “boomers,” armed with the most deadly of weapons—long-range, nuclear tipped warheads that can travel thousands of miles and potentially target U.S. territory.

To be fair, many other nations around the world have developed atomic submarines that are armed with long-range, nuclear missiles. In fact, the United States developed such technology back in the 1950s while China has worked to develop a comparable capability for decades.

So why should the average American actually care if Beijing is developing military technology the U.S. pioneered many decades ago or is upgrading its forces in other areas?

Indeed, China’s development of nuclear submarines is part of a bigger, more worrying trend: The creation of a truly modern military that, in many respects, aims to defeat America’s armed forces if conflict were ever to occur.

Beijing is developing a suite of weapons platforms that were once thought to be reserved for only the U.S. or would take nations like China and Russia decades to develop. In fact, Beijing seems to be closing in on cutting-edge weapons systems that seem more out of the pages of science fiction than reality.

For example, China has commissioned its first aircraft carrier from a scrapped ex-Soviet hull and is building at least one more.

Beijing is also developing multiple types of fifth generation stealth fighters, installed advanced air-defense systems that could potentially negate the advantages of America’s own stealth aircraft as well as anti-satellite weapons to attack the ‘eyes in the sky’ of U.S. warfighters on the battlefield—perhaps Washington’s greatest military advantage.

And then there are those weapons that seem more out of your latest Hollywood summer blockbuster than today’s armed forces. China has developed two different types of what many have dubbed “carrier-killer” ballistic missiles—the first ever deployed to any military in the world.

How such a missile would work in actual combat is key to understanding its potential—and how far the Chinese have come.

The system is mobile, making its detection difficult. When launched, the missile is guided using advanced types of radar, satellites and other platforms to find its target.

Why Chinese Radar, Not Missiles, Is a Game Changer in the South China Sea

Various reports indicate it has an advanced, maneuverable warhead (MaRV) potentially capable of defeating U.S. and other allied missile-defense systems. It strikes its target at speeds of Mach ten and beyond. And even more frightening, a new version of this weapon now holds the ability to attack vessels possibly as far as 2,500 miles away.

But Beijing isn’t stopping there. China has also successfully tested a hypersonic weapon that could carry, at least in theory, either a conventional or nuclear warhead.

Why is such a weapon a big deal? While it is still a number of years away from being an active part of China’s arsenal, it attack its target at five-times the speed of sound and has the potential to defeat American and allied missile defenses.

But it isn’t just America that should be worried when it comes to China’s rising military might. Indeed, thanks to geography, U.S. allies and partners face the greatest potential challenge.

Such a massive modernization—being undertaken across all branches of China’s armed forces—holds consequences for the wider Asia-Pacific region, especially in areas of competing territorial claims like the East and South China Seas.

As Heritage scholar Dean Cheng points out in a recent paper:

Modernization…means that the PLAN [China’s Navy] can both seek to establish control of the waters out to the first island chain and engage in sea-denial operations. The PLAN already outmatches every regional navy, with the possible exception of the Japanese Maritime Self-Defense Force.

With its large fleet of diesel-electric, AIP, and nuclear-powered submarines, the PLAN can interdict both commercial and military traffic and potentially overwhelm any response. The combination of PLAAF [China’s Air Force], Second Artillery, and Naval Aviation assets would pose a major additional threat to any surface forces that local navies could field.

Meanwhile, China’s Air Force would likely overwhelm any local air force in the area between the Chinese coast and the first island chain, while China’s array of short-range, medium-range, and intermediate-range ballistic missiles could hold targets on both land and sea at risk.

And all of this could just be the beginning.

With Beijing building man-made islands in the South China Sea and placing various types of military hardware in what are effectively becoming small military bases, China seems set to push out its military capabilities further afield—driving regional tensions to greater heights with every new grain of sand—as U.S. military service personnel pull parts off of museum planes to keep their jets in the air.

Harry J. Kazianis serves as a senior communications manager for foreign policy and legal studies at the Heritage Foundation. Kazianis also serves as a senior fellow for defense policy at the Center for the National Interest and fellow for national security at The Potomac Foundation. He is the former executive editor of The National Interest and former editor-in-chief of The Diplomat. Copyright The Daily Signal. This article was originally published on The Daily Signal.