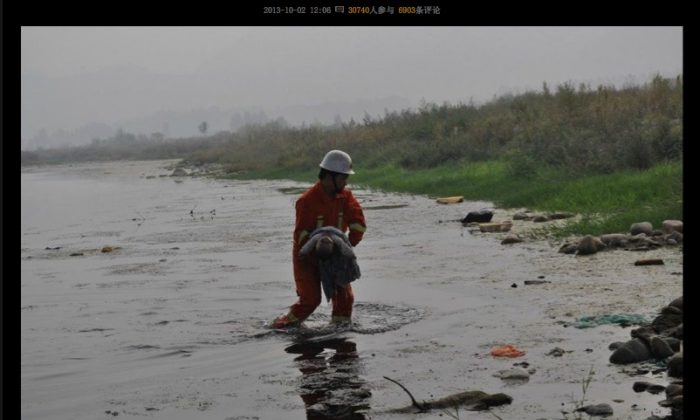 Screenshot showing the dead baby being retrieved from the river below the bridge where its parents were fighting in Henan Province. (Screenshot/Epoch Times)
China

Chinese Baby Drowns After Quarreling Parents Throw It Into River

A young couple threw their baby into a river in Henan Province while arguing, and by the time the emergency services arrived to rescue it, the infant was dead.

The husband and wife reportedly got into a fight on Ruyang County Xinda bridge early on Oct. 2, and the man is believed to have thrown the child into the river in a fit of anger, according to the Beijing News.

The media reported that the woman called the police immediately after the incident took place, and although assistance arrived within a few minutes, the baby was declared dead at the scene.

A preliminary police investigation revealed that the woman was planning to move in with her parents after a domestic dispute the previous night, and her husband was trying to stop her leaving, which led to the struggle on the bridge. However, the man said that the baby had accidentally fallen into the river. The couple is being detained while the police continue the investigation.

Netizens were shocked by the news, and mostly criticized the degradation of Chinese society.

One commented via People’s Daily: “Young people today always go their own way with no morality. They behave recklessly, regardless of the consequences. It has a lot to do with parental education and a great deal to do with the wider environment. Nowadays, all people in this society are self-centered. As long as they satisfy their own self-interests, they don’t even care about others’ life or death.”

Another said on Weibo: “When I read the news, it reminded me of how little Yue Yue was brutally run over by a car in Foshan City two years ago, how a little girl starved to death at home in Nanjing City, and how a baby was killed by being hurled to the ground in Daxing not long ago. Humanity is degenerating without even a bottom line.”