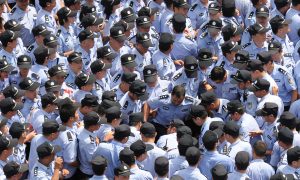 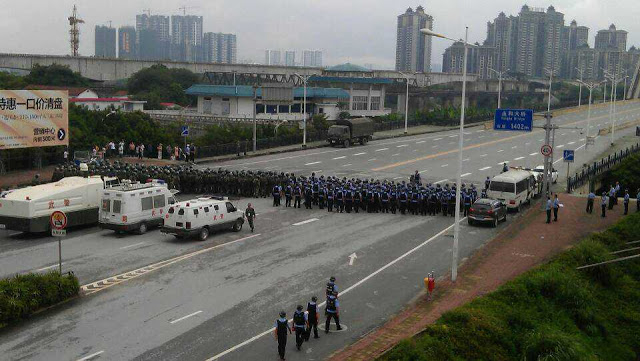 Thousands of armed policemen, armored vehicles and helicopters are pictured deployed for what authorities claimed was a flood evacuation exercise, on July 27, 2013 in Guangzi Zhuang Autonomous Region. (Internet photo)
China

The inhabitants of Nanning City in southern China’s Guangxi Zhuang Autonomous Region were told a flood evacuation drill would be held on July 27. What they saw unfold seemed to have more to do with riots than floods.

Chinese authorities announced the exercise on July 26, and several bridges and sections of highways were blockaded from 8:00 am to 1:00 pm on July 27, reported the Guangxi News.

They were accompanied by hundreds of police vehicles, fire engines, military vehicles, armored vehicles, and ambulances, along with four helicopters, in order to “combat” over a thousand people who carried bats and acted as rioters. The police fired water jets and tear gas at the “mob,” who threw bottles of water at the police in return.

According to the Jasmine Revolution report, the local authorities were training police and military units to deal with large protests, as well as to familiarize themselves with riot suppression techniques, because incidents of civil unrest have become more common in China as social problems worsen and its economy continues to slide.

A netizen from Nanning City questioned the exercise, “Were the riot police there to practice protecting civilians or practice suppressing them?”

Another netizen commented, “There were helicopters flying back and forth, broadcasting announcements for the crowds to quickly disperse, but this just attracted even more people to come and watch the event.”

According to the 2013 Blue Book of China’s Society, published by the Chinese Academy of Social Sciences, the annual number of group incidents stemming from social unrest, such as protests and riots, now amounts to an estimated one hundred thousand. According to Niu Wenyuan, an advisor to China’s State Department, over 500 of such events occur every day in China on average, or around 180,000 in one year.