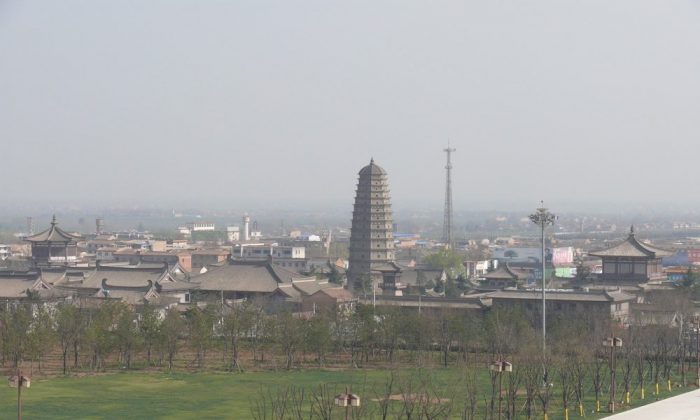 A development project near China’s Famen Temple designed to capitalize on tourism has brought nothing but debt to the communist officials who planned it. (Peter17/Wikimedia Commons)
China

Communist officials in Shaanxi Province have resorted to hiring fake monks to collect donations in an attempt to recover the debt they incurred from a large development project near the ancient Famen Temple.

The Xi’an authorities came up with a plan to profit from the stream of tourists to the 1,700-year-old temple by building a scenic park nearby with a giant Buddhist shrine. However, the project instead attracted plenty of debt.

When they lost their investors, the officials hired fake monks to wander the park and collect donations from tourists, which go to the company instead of the temple.

The company is scraping by on these fraudulent donations. Meanwhile the giant shrine has been labeled one of China’s ugliest buildings.

Statues have been set up with donation prices ranging from 10 to 50 million yuan to encourage donors to sponsor a specific statue, supposedly in return for blessings, according to the Weekly’s report.

The officials have been trying to involve the real monks in the project, but they do not approve, and did not attend the opening ceremony of the shrine in 2005.

Internet users warned visitors to the area about the true situation, and made sarcastic remarks about corruption in officialdom.

“Famen Temple and Famen Temple Scenic Park are totally different things; everyone must pay attention to this when traveling there,” a netizen wrote on China’s Twitter-like Weibo.

“When you get to the new Famen Temple Scenic Park, you can smell the stink of money,” another commented.