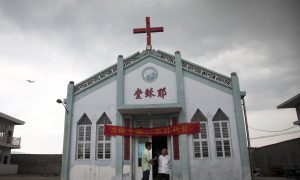 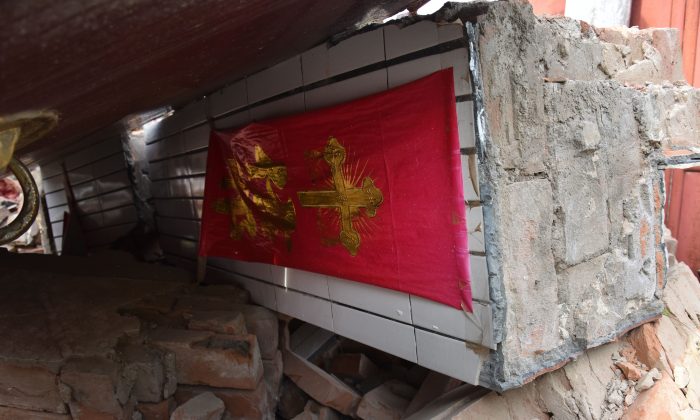 The pillar of a demolished Catholic church is seen in Puyang, in China's central Henan Province on Aug. 13, 2018. The church was demolished to make way for a commercial development. (Greg Baker/AFP/Getty Images)
China

Local Chinese authorities tore down another Christian church in May, after church members refused to donate the building to the county government.

Moreover, church members were ordered to pay the demolition cost and were fined 50,000 yuan ($7,236) for “illegally using farmland to build a church.”

Local government officials in Tanghe County, Henan Province, had initially demanded that the church building be donated to the county, a church member surnamed Zhou told Radio Free Asia on June 7. When the demand was rejected, the local court issued a mandatory demolition notice, and the roughly 2,700-square-foot church was torn down overnight on May 16.

Forced demolitions of Christian churches is widespread in China. In addition, since 2018, crosses on thousands of churches have been dismantled by local authorities in Henan, Anhui, and Shandong provinces, and Christian believers have been forbidden from attending meetings.

Zhou also revealed that the priest, Zhang Yongcheng, had to leave the county so that local authorities couldn’t target him to pay the fine. Meanwhile, Zhang’s son, a student, was intimidated at school.

After that incident, several other churches were “donated” to the Tanghe county government, and the donations were notarized, according to Zhou.

“If they refuse to donate, officials will come and tear down their church just like what they did to our church,” Zhou said.

Another church member who spoke on condition of anonymity said that the county government accused the church of using overseas funds for construction; in fact, all the money came from member donations and the church members still owe more than 400,000 yuan ($57,889) in loans.

Liu Yi, the founder of Chinese Christian Fellowship of Righteousness in the United States, told Taiwanese journalist Yang Hsien-hung in September 2018 that in Henan Province alone, crosses in nearly 7,000 churches were forcibly removed in 2018.

A priest surnamed Feng from Guangdong Province told Radio Free Asia that he was outraged when he heard about the recent incident in Tanghe County.

“Christian believers were even forced to pay the demolition cost. It tells us the suppression of Christians is getting worse. We’ve heard of similar incidents in Beijing, in Anhui Province and Jiangxi Province, as well as in northeastern China,” he said. “We are facing a harsh environment. We pray to the Lord to protect us and give us courage.”

The Chinese regime has recently intensified its suppression of house Christians, with reports since February that local authorities were dismantling underground churches, taking down crosses, and ramping up efforts to “sinicize” religious faith—in other words, forcing worshippers to recognize the Chinese Communist Party’s control over religion.