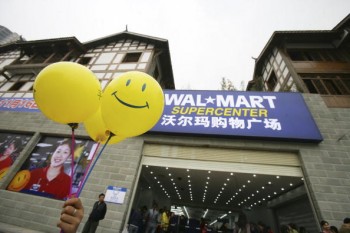 Authorities in the southwestern Chinese city of Chongqing have expanded political boss Bo Xilai’s “hitting the black” campaign to include a crackdown on problems with food and drugs. An early target: the retailing giant Walmart, all of whose stores in the megalopolis were shut down, with some staff arrested; the moves will cost the Arkansas-based company an estimated 100 million yuan (US$15.7 million).

Chongqing authorities announced on Sunday that the city’s 13 Walmart stores would be fined 2.69 million yuan (US$423,000) and closed for 15 days starting Oct. 10 as a penalty for selling 140,000 pounds of mislabeled pork. The fine was five times the value of the meat Walmart had sold.

Chongqing Daily, the local Communist Party newspaper, reported that the vice president and the director of a Walmart branch’s fresh meat department were arrested on Monday, while 25 staffers were detained and seven were put under residential surveillance.

With the rest of its 3,000 Chongqing employees undergoing food safety training and exams, as reported by the official state mouthpiece Xinhua News Agency, Walmart said over the weekend that it is willing to cooperate with local police in the food investigation. Chinese media reported that since Walmart set up stores in Chongqing in 2006, it has been penalized 21 times for selling expired, defective food, and for false advertising.

"I don’t understand why Walmart has not changed its policies after being penalized so many times," said Zuo Yong, head of Chongqing Administration of Industry and Commerce’s food regulatory sector, as quoted by Chongqing Morning Post. "Maybe no change has been made because it would increase the operations cost. Besides, Walmart has shown no regard for China’s laws and regulations."

Yang Guowei, regional manager of Walmart in Chongqing admitted to the newspaper that even though Walmart has a "strict management system," the stores have not done well in attending the "details of management."

"Walmart has invited a third-party company for supervision and inspection, but even under such a tight management system, we still have many serious problems," Yang said.

A Chinese netizen, Huang Peng Shou Ying, posted on a forum that Walmart only got penalized because the company fails to understand the Chinese bureaucratic environment, where companies bribe officials with money to get away with inspections.

"The authorities gave Walmart a warning the last time when its ducks were inspected and were said to have problems, but Walmart didn’t get it and didn’t bribe officials during the holidays," the netizen said. "So of course this time they didn’t let Walmart off the hook. Looks like Walmart’s management didn’t research the Chinese way of doing things well enough.”

On top of the official media reports criticizing Walmart, some locals in Chongqing provided more in-depth views on the incident.

Ms. Tan, who used to work in food safety management at fast-food chain KFC, told The Epoch Times that while the management philosophy in the West works well in the United States, it has a harder time surviving in China.

"In China, fake products are everywhere," she said. "When management [of foreign companies] gets localized, it is very difficult to maintain the Western management system."

While counterfeit products are "sold everywhere," local resident Ms. You, who lives next to a Walmart store, speculated that the Walmart crackdown had another layer of meaning.

"Last time when French President [Nicolas Sarkozy] met with the Dalai Lama, Carrefour, the French hypermarket chain, became a crackdown target," she said. "This time, the crackdown on Walmart might have something to do with the United States selling weapons to Taiwan. Maybe Bo Xilai, [the Secretary of the Chinese Communist Party in Chongqing], wanted to teach American companies a lesson, which would also gain himself some merits for the upcoming Party’s National Congress, where he could travel up the political ladder."

Bo Xilia’s “hitting the black” campaign was launched in June 2009. Although it was said to target gangsters, critics have claimed that the campaign is really about solidifying Bo’s power in Chongqing (many of the “gangsters” are officials loyal to the former Chongqing Party secretary) and promoting Bo on a national stage.

Ms. Hu, who works in a pharmacy chain store in Chongqing, said a local Food and Drug Administration official told the manager in the pharmacy not to display any “problematic medicine” during the latest crackdown to prevent from being caught. “This is because our boss has a good relationship with the administration. We have been sending the administration many ‘red envelopes’ over the years," she said.

“Behind the brick factory on Renhe Street, there are lots of shops collecting gutter oil and carrying out other illegal activities," said Mr. Zhou, a resident on Renhe Street in Chongqing. "Not only is the odor simply horrible, it is very bad for the health of local residents. The law enforcement personnel never did anything about it, yet they target a foreign company."

Despite all the fuss over Walmart’s pork, the food concerns did not seem to deter shoppers. Once local residents heard that the store was closing for two weeks, they rushed to their nearby Walmart to stock up.

An elderly woman told Chongqing Morning Post that she went to Walmart right away with her daughter-in-law, but with vegetables, meat, eggs, and many cooked foods all sold out just within a day, they had to return home with an empty bag.