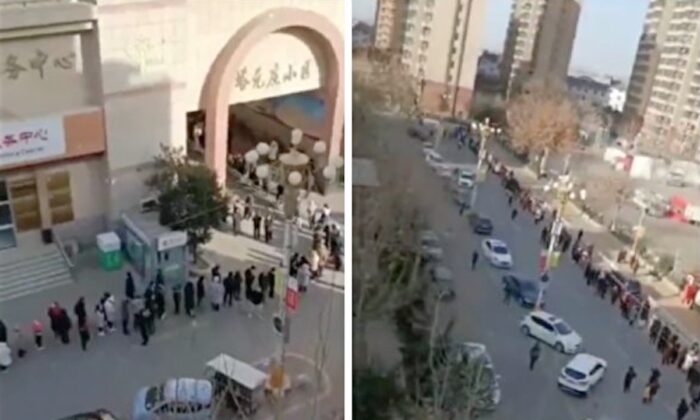 Around 20,000 people in Shijiazhuang, the provincial capital of Hebei, have been relocated to other areas for quarantine. Local authorities recently admitted that the latest CCP virus outbreak began spreading in the city nearly a month earlier than they had previously reported. Meanwhile, the outbreak has spread to Qiqihar, the second largest city in Heilongjiang Province, which caused an entire district to be locked down.

The new wave of the COVID-19 outbreak, a disease caused by the CCP (Chinese Communist Party) virus, in Shijiazhuang was concentrated in Zengcun township of Gaocheng district, and has spread to other parts of China.

The Epoch Times learned on Jan. 11 that after many residents in Zengcun were sent to quarantine sites, nearly 20,000 people who had remained were urgently notified by local authorities to be transferred to quarantine centers in remote areas.

This publication was able to reach out to a resident from Nanqiaozhai village, which is adjacent to Zengcun, who was sent to a hotel for quarantine. Sun Hua (alias) said, “Xiaoguozhuang village has been evacuated, and our Nanqiaozhai village was also evacuated. We were sent out to a site to be quarantined for 14 days, and only the immobile people were left at home. Liujiazuo village has also been evacuated.”

Sun said that on the morning of Jan. 11, local officials announced that they relocated over 20,000 residents from 12 villages in Zengcun, and were transported by bus to an undisclosed location for quarantine. But authorities did not say when the locals could return home.

The Epoch Times also obtained a video showing the villagers being transferred in buses.

In this round of CCP virus outbreaks in Hebei Province, local officials announced that the virus began spreading on Jan. 2 in Xiaoguozhuang village of Zengcun town, and the first confirmed patient was a woman surnamed Tian, who lived in the village. After attending a local wedding on Dec. 28, Tian developed a fever and tested positive for COVID-19. All residents in Xiaoguozhuang were tested for the virus on Jan. 3.

Sun said in a phone interview that he also attended the same wedding on Dec. 28. On Jan. 3, he was sent to a hotel for quarantine, along with the first group from his village. Sun tested twice for the virus and the results turned out negative. He believes that some of the wedding guests may have contracted COVID-19 before attending the wedding.

Hundreds of people attended two weddings in Xiaoguchuang, and at least 28 guests tested positive as of Jan. 2, according to an announcement by local officials in Shijiazhuang. The virus has since spread to other regions in China via wedding guests who traveled across the country.

According to internal government data obtained by this publication from a trusted source, at 8 a.m. on Jan. 9, there were 279 COVID-19 cases in Gaocheng district, Shijiazhuang city, Hebei Province, of which 268 cases were in Zengcun township. The vast majority of confirmed cases were concentrated in Xiaoguozhuang village.

For Jan. 9, local authorities had only announced 223 confirmed cases and 161 asymptomatic carriers for the entire province.

On Jan. 10, local officials in Hebei held a news conference on epidemic prevention and control, and announced that the first patient who was diagnosed with the CCP virus amid the new wave of the outbreak was confirmed as early as Dec. 15. In other words, the virus has been spreading for at least 17 days before authorities disclosed it.

According to a report by the Beijing Youth Daily, from mid to late December last year, many residents in various villages in Gaocheng district had already developed a fever and other symptoms of COVID-19, but most of them thought they had the common cold and went to local clinics for treatment.

Sun said that the conditions at quarantines sites set up in schools were not good. “Due to the epidemic, students are not going to school. The schools are used as quarantine sites, but there’s no heat. There are bunk beds inside the rooms that have small windows enforced with metal security bars. The elderly can’t bear it, and they are all agitated.”

Another villager surnamed Zhao who is currently quarantined in an undisclosed location, told The Epoch Times that he wished that the quarantine sites were more accommodating so he can groom himself.

Several people isolated at the quarantine sites told this publication that they were not allowed to speak to the outside world.

Meanwhile, the CCP virus has become rampant in Qiqihar city, in northeastern Heilongjiang Province. Authorities in Ang’angxi district announced on Jan. 12 that starting from 10 a.m. that day, the district will be locked down, and all communities and villages will be closed off (nobody is allowed to enter or leave the premises).

After the lockdown of Wangkui county in Suihua city, Heilongjiang on Jan. 11, Qiqihar officially announced that three people who returned to the city from Wangkui had tested positive for the virus, and four close contacts had also tested positive after taking a nucleic acid test. These seven people live in the Dawu Fuma village of Ang’angxi district.

Mainland Chinese media reported that the epidemic in Wangkui county had also spread to Changchun city, Jilin Province. On Jan. 11, authorities in Changchun said that a local medical institution had found four positive cases—they were two couples who had returned to Changchun after visiting Wangkui on Jan. 5 and Jan. 6. This shows that the epidemic in Wangkui has been spreading for some time.

On Jan. 11, Changchun’s epidemic control center carried out mass nucleic acid testing outdoors, despite the cold temperature of 14 degrees Fahrenheit (minus ten degrees Celsius). The spread of the epidemic caused panic among Changchun residents, who began to purchase masks and hoard food.

Luo Ya and Zhou Lan contributed to this report.