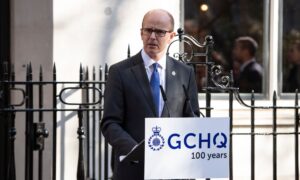 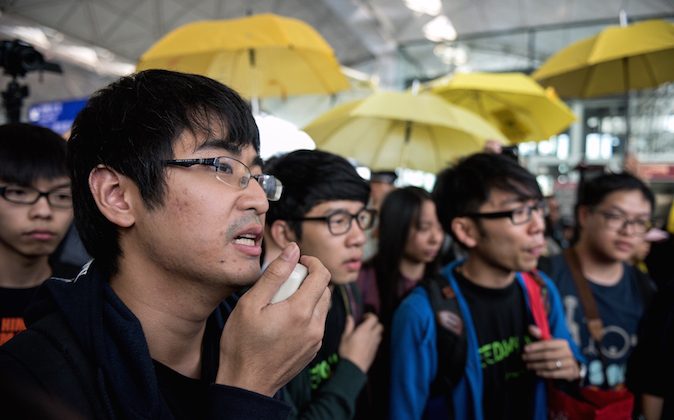 Hong Kong democracy protest leader Alex Chow (2nd L) talks to the media before he and two other activists had tried to board a flight to Beijing, at Hong Kong's international airport on November 15, 2014. Three Hong Kong pro-democracy protest leaders were unable to leave the city for a planned trip to Beijing in hopes of bringing their demands for political reform to Chinese authorities. (Alex Ogle/AFP/Getty Images)
China

Following announcements made earlier this month by leaders of the student-led pro-democracy movement in Hong Kong that they would send representatives to Beijing to negotiate with the Chinese central authorities, the communist regime appears to have blacklisted 500 individuals from traveling to the mainland.

As reported by Epoch Times earlier, on Nov. 7 the Hong Kong Federation of Students (HKFS) announced it would send a delegation of representatives to Beijing after the Asia-Pacifc Economic Cooperation summit, but the representatives were barred from entry on Nov. 15.

According to a Nov. 16 report by Hong Kong media, the Chinese regime has a list of 500 individuals from HKFS, Scholarism, and other student organizations. Those on the list are to be stopped by border control personnel should they try to cross from Hong Kong into mainland China.

Alex Chow, secretary general of HKFS, said that the regime’s move to prevent the students from travelling was a sign of communist authorities “denying a generation of Hong Kongers the right to decide their own destiny.”

Chinese authorities appear to have started to scrutinize visitors from Hong Kong even before the student representatives attempted to reach Beijing. He Kai, a member of a student organization at Hong Kong’s Lingnan University, said on Nov. 16 that a week earlier, he had tried to go north (into the mainland), only to be stopped by border police in Shenzhen, a city in mainland China right next to Hong Kong.

He said that he was locked up in a small room and multiple border control officers interrogated him. They performed a body search on him and went through his luggage. The officers then denied He entry to the mainland on grounds that he posed a “threat to national security” and “impacted China’s foreign relations.” During He’s detention, two guards were posted outside the room to “prevent his escape.”

Aside from student participants of the ongoing 50-day-long Umbrella Movement, numerous artists and celebrities who voiced support for the protests, including Chow Yun-fat, who starred in “Crouching Tiger, Hidden Dragon,” have been banned by Chinese censors.