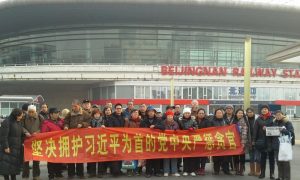 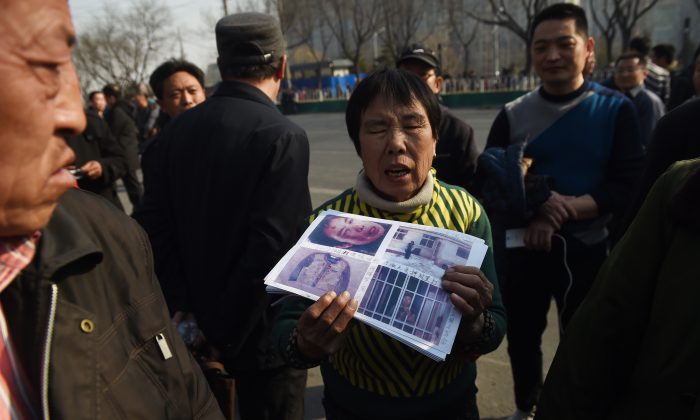 A petitioner holds photos of evidence in her grievance against local officials, outside a government petition office in Beijing on March 2, 2016. (Greg Baker/AFP/Getty Images)
Chinese Regime

More than 250 Beijing citizens and rights activists signed a “letter of advice” to the Chinese regime’s rubber-stamp legislature ahead of its annual session in early March, calling for greater protections for petitioners in the country.

Authorities have been swift in their response, with reports that Beijing police have began to investigate several signatories and have detained the person who started the petition.

In a letter titled “Letter of Advice to the National People’s Congress from the People of Beijing,” 251 signatories urged more transparency and oversight of bureaucratic processes, greater rights for petitioners at all levels of government, and an end to authorities forcibly evicting and relocating people from their homes. The letter was posted on a public online platform hosted by the Beijing city government.

According to Defending Human Rights, an overseas-based website that serves as a clearinghouse for rights abuses in China, the author of the petition, Liu Jingru, was taken away by police on Feb. 1 and hasn’t been seen since. Authorities are also reportedly looking for the “leaders” behind the petition.

Meanwhile, police have visited several Beijing petitioners and questioned them about their activities.

Not Breaking the Law

Beijing resident Wang Xiuzheng, a signatory to the petition, told Radio Free Asia that police have visited her home three times to interrogate her about the letter.

Wang said she asked the police, “We [petitioners] have not broken any law. We have petitioned in the usual way, is there anything wrong with that?”

Since ancient times, Chinese people have had the right to submit their grievances to authorities through written letters or by in-person visits. State petitioning bureaus have been set up across the country to receive and handle complaints by aggrieved citizens who can’t resolve their issues at the local level. However, authorities have consistently harassed and detained petitioners in an attempt to stop them from making public protests.

Wang told the outlet that she joined the petition to urge authorities to stop all illegal acts, including forced evictions, and ensure the rights of citizens to lawfully petition their grievances.

Wang said that many people were driven to petitioning after their experiences in the court system, where they allege judges failed to carry out justice.

Another Beijing resident, Guo Jiang, told the outlet that he felt compelled to sign the letter after being repeatedly held in “black jails” for petitioning against the demolishing of his home by authorities.

Black jails are an extrajudicial network of detention centers used to detain petitioners, preventing them from exercising their right of complaint.

Another Beijing resident, Hu Xiulan, also signed the petition. She told Voice of America that she has been visited by the police.

When Hu asked the police whether or not what she did was illegal, the police replied that it wasn’t, she told the outlet.

Hu said she became a signatory because of what happened to her son when he protested their home being demolished by authorities. She said her son was beaten and detained by the police. Hu has been petitioning the son’s case since then, seeking an explanation from the court.

Another signatory, Li Huiqian, said police have detained several people already but weren’t able to take her because she wasn’t at home at the time, according to Voice of America.