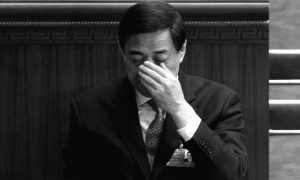 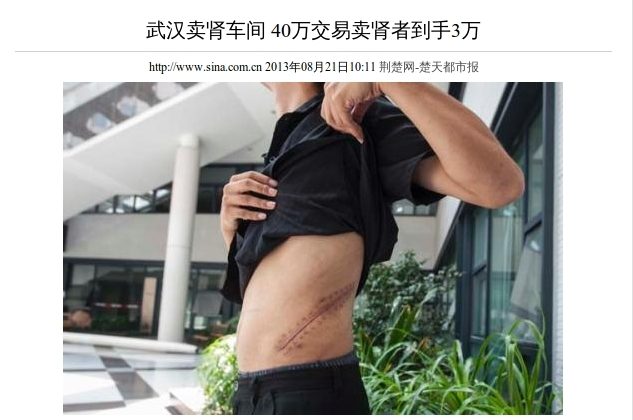 A man exposes a scar where a kidney was removed, in an article by Chutian Metropolis Daily, a newspaper in Hubei Province, where the city of Wuhan is located. Chinese police recently broke up an organ smuggling ring operating out of Wuhan. (Screenshot/Epoch Times Staff)
China

Ten Chinese plainclothes police officers stormed into a villa on Aug. 17 minutes before a kidney transplant was to take place, arresting the surgeons and recipient patient involved in the scheme, according to Chinese press reports. The tipster in the case was a man who had previously sold a kidney and had complaints about the procedure.

A room in a countryside villa near Wuhan, a city in central China, had been set up for the transplant operation. The kidney removal and transplantation was intended to take place in the same room at the same time.

The speed and facility with which the procedure was going to take place indicates a highly trained surgeon who has honed his skills over many operations, according to Jianchao Xu, Assistant Professor of Nephrology at Mount Sinai School of Medicine.

“Whoever is doing it must be very skillful. This is not a hospital environment, so the equipment is inadequate. This involves multidisciplinary skills. A surgeon whose team is able to perform such a complex operation in a villa or residential setting must be extremely skillful and organized,” he said. “It’s almost unbelievable from a Western medical point of view.”

In the United States, Xu said, a kidney transplant would involve two teams of surgeons: first for extraction, and then for transplanting the kidney into the recipient. Removing it requires more skill, he said. “You’re talking about at least two operating rooms. But I can imagine they could put these two patients in the same room. All possibilities are open here given such conditions.”

Li Wei had previously told the police about the organ racket, and identified the location of the villa. The police later raided the organ ring on Aug. 17.

A number of organ smuggling rings of this kind have been broken up by the Chinese police in recent years, with some of the cases going to trial and resulting in convictions. The results have invariably been trumpeted in the Chinese press as examples of the determination of the Chinese Communist Party to stamp out illegal organ transplantation.

The transplantation establishment in China has come under intense international scrutiny in recent years because of the widespread use of death row prisoners for their organs, and for the mounting evidence that tens of thousands of prisoners of conscience, predominantly practitioners of Falun Gong, a spiritual practice that has been persecuted since 1999, have been killed for their organs.

The operation uncovered in Wuhan is vastly different from the state-run organ harvesting carried out by the Chinese military-medical complex. Critics suspect that the Communist Party promotes the crackdowns on these small operations to give the impression that such activities are the extent of illegal organ harvesting activity in China.

Most recently, the Chinese medical official Yang Chunhua, director of the Intensive Care Unit of the First Affiliated Hospital of Sun Yat-sen University in Guangdong Province, admitted in an interview with a state-run newspaper that for years in China consent had not been obtained from prisoners whose organs were removed.

With research by Ariel Tian. Translation by Frank Fang and Rebecca Chen.