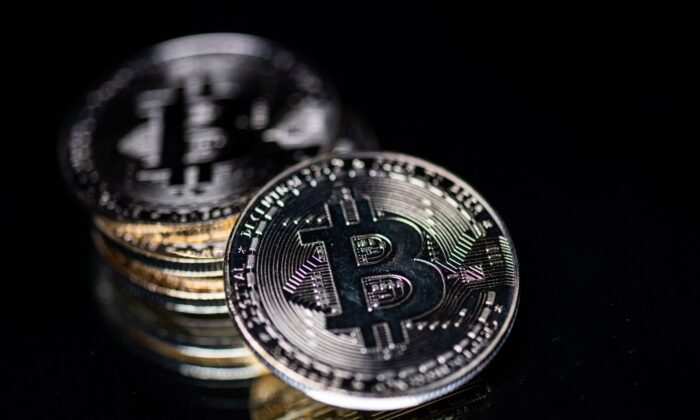 A physical imitation of the Bitcoin crypto currency is seen in Paris, France, on April 26, 2021. (Martin Bureau/AFP via Getty Images)
International Relations

New York-based cryptocurrency hedge fund manager Stefan He Qin was sentenced to seven and a half years in prison for fraud on Sept. 15.

The 24-year-old Qin was accused of misreporting the proceeds of the $90 million fund he managed and embezzled investor funds to pay for his extravagant living expenses.

At the age of 19, he founded two cryptocurrency investment funds Virgil Sigma and VQR in New York City. The two funds claimed a total investment of $100 million, with many investors being from the United States. At the age of 20, he appeared on Chinese state network CCTV because of his “success”.

U.S. attorney for the Southern District of New York, Audrey Strauss, said Qin’s investors soon discovered that his investment strategies were nothing more than a disguise, allowing him to embezzle client funds for unauthorized investment, just like a Ponzi scheme.

“When faced with redemption requests he couldn’t fulfill, Qin doubled down on his scheme by attempting to plunder funds from VQR to satisfy his victim investors’ demands,” Strauss said.

“Qin’s brazen and wide-ranging scheme left his beleaguered investors in the lurch for over $54 million, and he has now been handed the appropriately lengthy sentence of over seven years in federal prison,” she said.

The prosecutor said that since 2017, Qin did not invest the fund’s assets in an arbitrage trading strategy as advertised.

Instead, he misappropriated investor funds from Virgil Sigma to pay for personal expenses, such as dining, services, and rent. According to a February report by Bloomberg, the monthly rent for the condominium where Qin lived was $ 23,000.

In 2020, Qin could not meet redemption requests from investors in Virgil Sigma. To prevent being exposed, he attempted to steal investor’s capital from VQR, his second company, by closing out all investors’ trading positions.

Qin was exposed before he could successfully tamper with investors’ funds in VQR. However, he has successfully duped over 100 investors of their investments.

The prosecutors said Qin frequently lied about the value, location, and status of the investment capital to investors, and provided falsified tax documents to investors.

The Virgil Sigma Fund and VQR have ceased operations, and the liquidation and distribution of assets are to be taken over by an entity appointed by the court.

Qin was also sentenced to three years of supervised release.