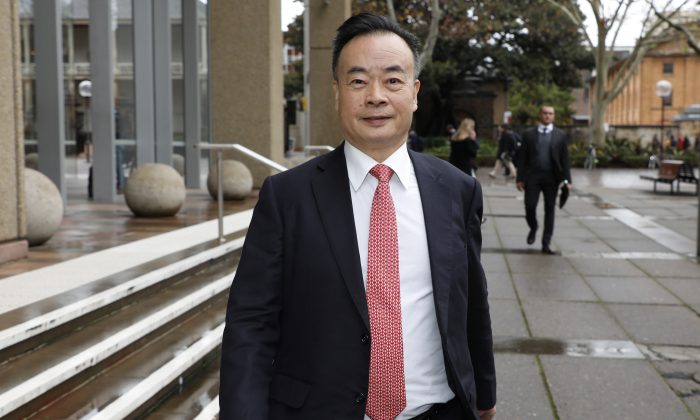 A judge has ruled in favour of Chinese-Australian billionaire Dr. Chau Chak Wing in a defamation case against Fairfax Media and one of its journalists that Fairfax said it will be appealing.

The property developer, philanthropist, and major political donor sued the organisation and John Garnaut over an online story published in October 2015 that the court has found falsely insinuated that Chau was part of a plot to bribe former U.N. President John Ashe and deserved to be extradited to the United States.

Chau welcomed the ruling and told local media that Fairfax and Garnaut had been unreasonable to claim that he might remain in China to avoid extradition to the United States.

“In handing down his judgment today, Justice Wigney found that the language used in the offending article was not only at time imprecise, ambiguous and loose, but also sensational and derisory,” Chau said.

“I put my faith in the Australian legal system, and today that faith has been vindicated. I am very grateful to the Federal Court of Australia for its fair hearing throughout this case.

Wigney of the federal court ordered Fairfax to pay $280,000 (US$199,000) in damages to the billionaire on Feb. 22. In addition to the damages, Fairfax has been ordered to pay Chau’s legal fees, which The Australian reported could be at least another $500,000.

Wigney agreed with Chau that the article’s tone “flows from the sensational and hyperbolic language at times employed, as well as from some rather gratuitous barbs and insinuations; some subtle, others not,” according to The Australian.

However, the justice did not find support for Chau’s second claim that Garnaut’s article had suggested that he built his business empire in Australia on illicit payments to government officials.

In response to the judgment, a spokesperson for The Sydney Morning Herald and The Age said, “We are disappointed that the judge did not uphold our public interest defence, which was the only one available to us under Australian defamation law, and was not persuaded by our evidence. We will be appealing the federal court’s decision.”

Look forward to the appeal.

But first, what happened in @Ageinvestigates case about the truth of Chau’s activities not being an acceptable defense?

“John Garnaut is a careful, meticulous, Walkley award-winning journalist who is globally recognised for his China expertise.”

Garnaut is a former Beijing correspondent for The Sydney Morning Herald and a former senior China adviser to former Prime Minister Malcolm Turnbull. He is also the son of a former Australian ambassador to China, Ross Garnaut.

He said in a statement: “I place great store in my personal integrity and professional credibility. I took great care in compiling this story, building on six years of close observation. I believe the story was reported fairly, responsibly and in the public interest.”

Information relevant to the case had been publicly disclosed by Andrew Hastie in Parliament last year, but the Parliamentary Privileges Act 1987 prevents any such statements from being admissible as a defence.

“Within the current defamation regime, both The Sydney Morning Herald and The Age remain committed to the role of public interest journalism,” the spokesperson said. “We source and check all our stories vigorously and take great pride in our role to inform the community debate.”

In response to the defamation ruling, the Media Entertainment and Arts Alliance (MEAA) agreed that there is an urgent need to overhaul Australia’s defamation laws.

MEAA Media federal president Marcus Strom told Mumbrella: “MEAA members believe that this decision is the latest in several cases involving defamation actions against experienced, responsible journalists reporting on matters the public has a right to know about. Journalists must be able to fulfill their duty to the communities they serve. The defamation system is stacked against Australian journalists. It makes their job of shining a light into public interest matters all the more difficult.”

The chair of the Parliament’s intelligence and security committee, Andrew Hastie MP, repeated his concerns about the impact of the ruling and Australia’s defamation laws in their current form on the freedom of the press.

Parliamentary Joint Committee on Intelligence and Security Chair Andrew Hastie has issued a statement following the judgement released today on the defamation case brought by Chau Chak Wing against Fairfax over an article by John Garnault. pic.twitter.com/WRCWoH2Qkh

“This judgment will be carefully analysed,” Hastie said. “Generally speaking, we are concerned about the impact that defamation laws in Australia are having on responsible journalism that informs Australians about important national security issues.”

Hastie had, on May 22, 2018, used parliamentary privilege to disclose to Parliament that the FBI had alleged that Chau was an individual referred to in the bribery case first identified by U.S. authorities in 2015 involving Ashe, although the United States government had previously not charged Chau for reasons “that are best undisclosed.”

Hastie said he believed it was important for him to raise the matter because the matter “poses a threat to our democratic tradition, particularly the freedom of the press, and our national sovereignty.” Hastie warned that for investigative journalists writing about foreign interference and influence, Australia’s defamation laws pose the risk of being used by the nation’s “strategic rivals.”

Hastie said that according to a 2007 U.S. government diplomatic cable that he tabled, Chau, also known as Zhou Zerong, was identified as the leader of a business group that is “essentially a creature of the Chinese Communist Party’s (CCP’s) United Front program.” The United Front is a department of the CCP that runs influence operations overseas.

In response to Hastie’s comments at the time, Chau’s lawyers said: “Our client is very disappointed that an elected representative would use the cover of parliamentary privilege to repeat old claims and attack his reputation just weeks before some of these matters are tested in court,” and that Chau as “confident of being vindicated.”

Chau’s barrister had more recently said that monetary compensation was not something Chau was seeking.

He added that for Chau, the most important outcome of the case had been delivered by the justice, which was for his name to be vindicated.

After the Justice ruled in his favour, Chau said, “I will be donating the damages awarded by Justice Michael Wigney in full to a number of charities supporting Australian veterans and their families.

“I make no apology for my philanthropy, and consider it a duty to give back after the good fortune I have experienced with my business,” he added. Over the past five years, Chau has also donated $560,000 to the Australian War Memorial, according to Fairfax.

“As an Australian citizen, I will continue to proudly promote positive Australia-China relations.”

In separate court proceedings, Chau is also suing the ABC and Fairfax investigative reporter Nick McKenzie over a Four Corners report that Chau argues portrays him as a spy for China who serves the interests of the Chinese Community Party. That case was heard by the court on Feb. 21, and according to The Australian, the ruling is also being challenged with the defence of statutory qualified privilege after Fairfax’s defence of truth was thrown out.