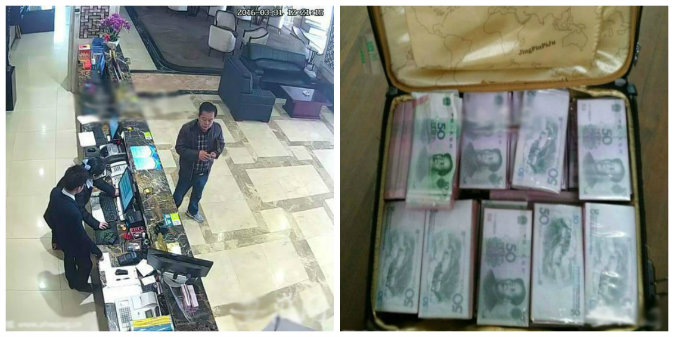 (L-R) Mr. Nan, the man who sold two middle-aged women fake bills, is caught on camera. The suitcase is stuffed with counterfeit bills by Nan. (via Anhui Net)
China

Chinese Aunties Get Lesson in Crime in Fake Bill Scam

Two middle aged Chinese women from east China were set to be successful con artists—until they confessed to the police that the thief who supposedly stole a large sum of money off them was actually their counterfeit bill supplier.

Ms. Shao and Ms. Tang, both residents of Ma’anshan City in Anhui, had first met counterfeiter Mr. Nan on WeChat, a popular messaging app in China, according to a report by Anhui Net on April 27. After going out for lunch together, Mr. Nan gave the women a few hundred “high-quality fake Chinese yuan bills” as a present.

Erring on the side of caution, Ms. Shao and Ms. Tang met with Mr. Nan in Hefei, the capital of Anhui, to inspect the quality of the bills they would be getting. Satisfied with the goods Mr. Nan produced—shop vendors accepted the latest batch of “fake” bills—the two women agreed to exchange real cash for the excellent fakes at a coffee shop in Anhui’s Shucheng county on April 6.

On the date of the exchange, Mr. Nan quickly walked out of the coffee shop after passing the women a briefcase and collecting his payment. Panicking, the women opened the briefcase, and found it stuffed with counterfeit yuan notes of very poor quality.

In hopes of getting their life savings back, Ms. Shao and Ms. Tang decided to make a fraudulent police report—someone had stole their 200,000 yuan at the coffee shop in Shucheng county, they said.

However, after failing to find Mr. Nan on their own—they had scoured several bus and train stations—Ms. Shao made a confession to the police, and posted bail. Ms. Tang has since vanished, possibly fearing that she might be punished for purchasing fake bills, according to Anhui Net. The police are currently looking for Ms. Tang and Mr. Nan.

In the discussion section of Chinese news website The Paper, netizens chastised the two women and gave their own analysis of the incident.

“Shang Yan G” wrote: “You’ve only yourselves to blame—have a taste of your own medicine.”