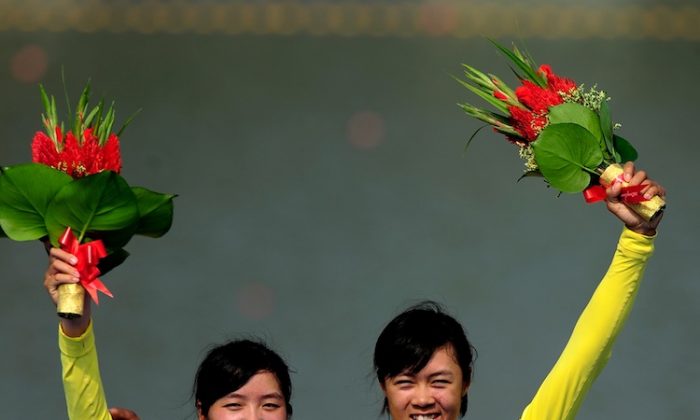 Rowers Wenyi Huang and Feihong Pan of China win gold during the 16th Asian Games in Guangzhou, Nov. 18, 2010. Chinese athletes have their own food supply chain—but even then, keep away from pork because of drugs that are fed to the pigs. (Jamie McDonald/Getty Images)
China

Food safety in China is so suspect that elite athletes across the country have been told not to eat pork–in case they are accused of using performance enhancing drugs. And that’s a standing order even as the food consumed by athletes is segregated from the rest of the food supply chain.

Chinese rower Huang Wenyi, currently training for the 2012 London Olympics, illustrated the severity of the situation on her microblog on Jan. 20, writing that “lean meat powder” was found in the pork raised and prepared exclusively for national athletes.

“The General Administration of Sport in China issued an urgent order banning athletes from eating pork altogether,” the gold medal winner at the 2010 Guangzhou Asian Games wrote. She continued: “Beef or lamb cannot be eaten when dining out for fear that banned substances in the meat would cause athletes to fail the drug tests. When dining out, we are only allowed to eat fish and chicken.”

To the observers, Huang’s blog posts verified at least two things: that China’s top athletes are provided with food from private farms that closely monitor the supply chain to ensure that it’s free from contaminants and banned substances—something the public has suspected and brought up frequently, but which has been repeatedly denied by China’s authorities—and that, if even the special food for athletes may have been contaminated, common food in China is potentially riddled with drugs and additives.

“Those who are in charge here are in shock,” Huang wrote on her blog. “Until now, we were allowed to eat the ‘safe meat’ flown in for us straight from Beijing. Now even the pigs raised specifically for the athletes have been found to contain lean meat powder [the common name for clenbuterol in China]. It makes one wonder: Is there any place that is safe for any of us?”

Although banned by the Chinese Department of Agriculture in 1997, China’s pig farmers continue to add clenbuterol to animal feed to speed muscle growth and reduce fat.

German table tennis player Dimitrij Ovtcharov tested positive shortly after his tournament trip to Suzhou, China in August 2011. As clenbuterol was found only in his urine, and not in his hair, Ovtcharov was proven to be the innocent victim of tainted pork he had consumed during his stay in China.

Some of China’s most famous athletes indicated that they refrained from eating meat years ago. Chinese swimmer Zhang Lin said that eating pork is like “a time bomb.” Former Olympic champion Liu Xiang also stopped eating pork long ago.

Liu’s father explained that, as a top athlete, Liu Xiang has been very careful not to be wrongly accused of taking performance-enhancing drugs. “We learned about the effects of lean meat powder years ago, not just in the last two years,” he said. “Liu Xiang has not eaten pork for a very long time.”