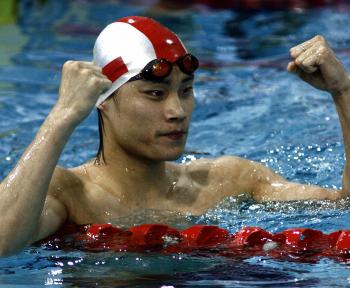 Chinese swimmer Ouyang Kunpeng has been suspended for life for use of performance-enhancing drugs. (Antony Dickson/AFP/Getty Images)
News

Many Chinese athletes, and particularly the swimmers, may fail drug tests as the International Olympic Committee introduces more tests and tougher penalties to reduce doping.

Chinese athletes have won some of their weakest events, like swimming and rowing, fuelling speculation about their enhanced performance.

On Sunday, four Chinese women came into the heats of the 4×100 freestyle relay with an average world ranking of 39th. They left as the top seed.

Chinese athletes were notorious for doping in the run-up to the Sydney 2000 Olympics, and China is also one of the key producers of illegal performance-enhancing drugs.

The Chinese Olympic Committee said that "the overwhelming majority" of its 27 athletes were dropped from the Sydney Olympic team because they failed drug tests. Many of them were using the banned blood booster erythropoietin or EPO.

Swimmer Ouyang Kunpeng and wrestler Luo Meng were dealt heavy lifetime sentences and their coaches were also suspended for life.

Divers Zhang Jun and Gao Li and their coaches were all banned for one year after testing positive for furosemide.

Weightlifter Shan Yan and her coach have been banned for two years after she tested positive for indapamide. Track and field star Xin Jia was banned for four years and so was his coach.

A decision is yet to be made about swimmer Yi Changming and Zhang Qi from track and field.

World Anti-Doping Agency chairman John Fahey told the Globe and Mail that drug cheats could even be stripped of their medals many years later if technology is developed later allowing them to retest frozen samples.

IOC president Jacques Rogge said he expects between 30 and 40 athletes to fail drug tests at the Beijing Games.

Director General of WADA David Howman said 50 kinds of EPO are available, and athletes have been trying new drugs to escape being caught out.

Some athletes were caught using third-generation EPO at the Tour de France last month, he said.

He said many of the illicit drug manufacturers had closed down in China in recent months in preparation for the Games.

The Russians have also been accused of running a doping program with their athletes.
More than 30 Chinese swimmers failed drug tests in the 1990s.

The International Olympic Committee (IOC) said on Thursday that some doping offenders would be banned from the next Games.

From July 1, any athlete who is banned for six months or more for a doping offence will be banned from the next Olympics in London in 2012.

Athletes caught during the Beijing Olympics from August 8-24 Games will have their cases heard before the IOC Executive Board in Athens.

About 4500 doping tests will be carried out during the Beijing Games, up from the 3600 at the Games in Athens four years ago.

Authorities have the right to test athletes more than once on the same day.

All top five finishers and two random athletes will be tested.

China has 41 doping control stations set up for the Olympics, and 34 are in Beijing.

Chinese authorities said the China Anti-Doping Agency carried out more than 6000 tests by the end of June on 4428 for athletes from track and field, swimming, cycling, weightlifting, wrestling, judo, rowing, canoe and kayak, triathlon and modern pentathlon.