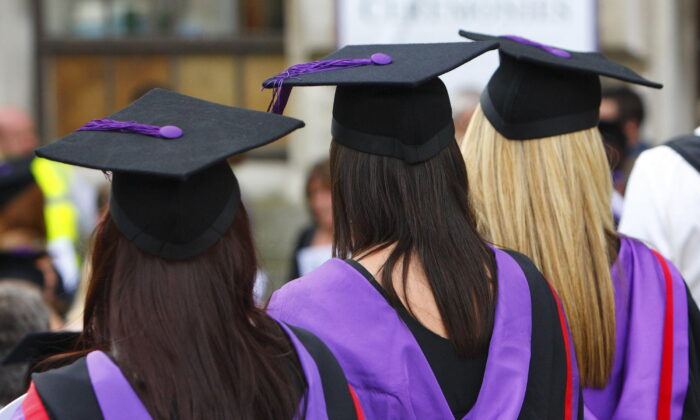 Chinese Applicants to UK Universities up 60 Percent in 3 Years, Raising Fears of Over-Reliance

The number of Chinese applicants to British universities has risen by almost 60 percent in three years to a record 31,400, raising fears that UK institutions have become overly reliant on China.

The number of Chinese applicants is over 8,000 more than the number of applications from all 27 countries of the European Union, which was the biggest source of overseas demand before last year, according to the university admissions service UCAS.

In total, 135,000 international students have applied to UK universities this year, an increase of 3 percent on 2021. They account for nearly 20 percent of all applicants.

China is now by far the biggest overseas market for UK universities, with the number of Chinese applicants rising by 10 percent from last year alone.

By contrast, the number of applicants from the EU fell by 54 percent to 23,160 between 2019 and 2022, as EU students face higher tuition fees after Brexit.

“To me, it’s a great thing that so many Chinese people want to study in the UK, but it does put our universities at serious risk of shifting geopolitics,” he told The Telegraph.

“If there was a shift in UK–China relations, British universities would be a big loser and will do less research,” he said.

In June, backbench MPs from across the political spectrum proposed an amendment to the Higher Education Bill that would outlaw the Chinese regime-funded Confucius Institutes if they are seen to curb freedom of speech and academic studies.

The government also introduced its own amendments to curb foreign influence on campuses, under which universities will be sanctioned if they allow China to influence what is said on campus.

Problematic Chinese funding also originates from the Chinese military, The Times of London reported in February.

The number of research collaborations between UK scientists and Chinese institutes with deep connections to the People’s Liberation Army (PLA) has tripled to more than 1,000 in six years, according to an investigation conducted by the paper.

Since 2015, British universities have accepted £240 million ($325 million) from Chinese institutions, many of which have close links to the PLA.

British academics have collaborated with military-linked Chinese universities on sensitive “dual-use” research, involving technology that can be used for both military and civilian purposes, including drones, electromagnetic technology that can fire projectiles, aerospace materials, radar, jamming equipment, and high-performance batteries, the report said.