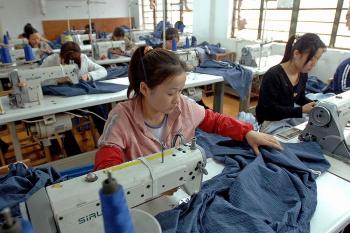 The price of Class 328 cotton has surged since the beginning of 2011, reaching 30,000 yuan per ton, which is 10 to 15 percent higher than the end of 2010. In the Zhujiang River Delta, workers' salaries were 10 percent higher than last year due to a labor shortage which caused the minimum monthly salary to rise to 2,000 yuan. Consequently, many apparel factories, unable to pay those wages, have closed or downsized.

An industry veteran in Shenzhen named Guo, said that high labor and materials costs have severely impacted his company. “We put much effort into sales, but the price offered for our product is too low. Unable to make expenses, we have to forgo the sale.”

In the Jiangbei New Century Shopping Mall in Chongqing, the spring fashion collection is on view. However, prices are proving to be higher than many consumers are willing to pay. Ms. Mao, an employee with a private company, said, “This spring we can't find anything in the 200 yuan range. Even a simple cotton shirt is more than 300 yuan. I looked around for a long time but could not pull the trigger.”

China at the Bottom of the Totem Pole

China's textile and apparel factories have supplied clothes to many countries. However, the products made there are still at the bottom of the totem pole and are known for having high quantities but low prices. A shirt with a Chinese brand yields only one third the profit that a similar shirt with a foreign brand would. Two hundred million shirts are worth one Boeing aircraft. The apparel industry generally holds the view that China is a large producer of clothes, but not a strong one.

An article published on the China Textile Information Net stated that the average net profit in the textile industry is 3 to 4 percent. If the value of the yuan goes up by 5 percent, more than half of the textile businesses will be greatly impacted, since China will lose business by no longer being the lowest cost producer.

The future of China's textile industry will become more difficult if China is overly dependent on foreign markets and is unable to set prices. If it wants to break through these obstacles, it must elevate its position in the supply chain, create its own brands, and control the sales network.

China needs to shift its focus from the overseas apparel market to the domestic market. However, a prerequisite is that the Chinese people must have enough disposable income. According to economist Lang Xianping, China's labor salary only accounts for 8 percent of the GDP right now, a substantial drop from the 12 percent of 10 years ago. The ratio averages 55 percent in North America and Europe, and 38 percent in South America. Based on these numbers, Lang sees the low disposable income of the Chinese public remaining a hindrance to development in mainland China.