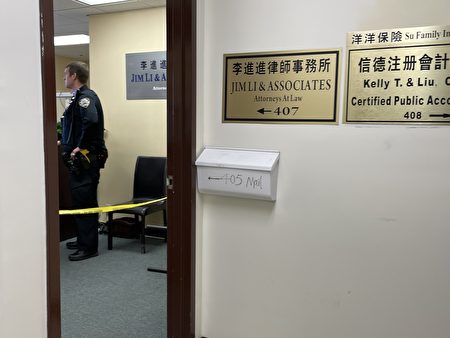 Police investigate the scene of a stabbing in a lawyer's office in NY on March 14, 2022. (Lin Dan/The Epoch Times)
US

A Chinese American immigration lawyer was fatally stabbed by a client in his New York office over asylum-seeking disputes. The tragedy sparked condolences and debate on social media.

Jim Li, a prominent China-born immigration lawyer in New York, was killed on March 14 allegedly for declining a client’s request to sue her previous lawyer, who she believed was responsible for her claim being rejected, said people familiar with the matter.

Police reported the homicide occurred at around 11:40 in Li’s office, in the Flushing area of Queens. The 66-year-old victim died from fatal stabs to the heart and neck and excessive loss of blood after he was rushed to Elmhurst Hospital.

Police have identified the woman as Xiaoning Zhang, a 25-year-old claimant from mainland China. The assailant faces charges of murder and illegal possession of weapons.

An eyewitness surnamed Xu told The Epoch Times that she helped in calling the police. Xu works for an insurance company near Li’s firm.

“I saw Li stained with blood all over his body,” said Xu. “I was told the stabs were all fatal, at the heart and the neck.”

Three days prior to the killing, Xu saw the same woman at Li’s office, and she appeared uncontrollably furious, while Li remained calm.

The victim’s friend Wei Zhu, also a lawyer, said the suspect asked the immigration lawyer on that day to represent her and to charge her previous lawyer. After being refused, she started crying and shouting but eventually left after police arrived.

Victim was a 1989 Tiananmen Square Activist

Li’s death triggered sorrow and sympathy among his friends and fellow activists, who remembered his dedication to advancing China’s democracy.

Li received various levels of law education in China. During the 1989 Tiananmen Square democracy protests, he helped create the Beijing Workers’ Autonomous Federation to support the movement. Li served as a legal counsel. Following the Chinese Communist Party’s (CCP) brutal crackdown, Li received a 22-month detention for his involvement in the campaign.

In 1993, he moved to the United States as a visiting scholar at Columbia University in New York. In 1998, Li graduated from the University of Wisconsin and obtained a PhD in Law, after which, he practiced as a lawyer in NYC.

Meanwhile, Li provided legal advice to a large number of dissidents in the United States and attended anti-CCP gatherings with different advocacy groups, including the Democratic Party of China.

Questions about the background of the attacker have been raised.

Bai Jiemin, chair of the eastern U.S. branch of the Chinese Democracy & Human Rights Alliance, told The Epoch Times that the suspect moved to the United States on a student visa in August 2021 and joined anti-CCP protests. She told him two Beijing police officers raped her and put her in a mental facility in November 2019. She showed him proof of petitioning and a Chinese court’s decision against her, the interviewee said.

The suspect travelled to the UN headquarters and staged a protest with a sign reading “Beijing police raped me” during the annual UN General Assembly in late September 2021.

In November, however, the asylum seeker backed out, claiming that she had been forced into staging the protest. She demanded her image be removed; otherwise, she threatened she would take to the courts.

“This person is extremely abnormal,” said Bai, “based on her previous behavior, chameleon-like, bigoted, and highly distrustful [even] of all who have helped her.”

However, Bai emphasized in the interview that the attacker was not mentally ill as far as his knowledge was concerned. Instead he said she was a smart woman and could speak English as well.

Later, she apologized for her reversal to Bai in a letter, admitting that she felt mounting pressure from her parents and relatives back in Handan, Hebei Province, who could no longer endure pressure from the Chinese authorities after she protested outside the UN headquarters.

“She also told me officials from the Chinese embassy talked to her but declined to provide their names and the date of the talk,” Bai said.

“They must have brainwashed her or promised to offer her help,” he added.

As the suspect was led from 109th Precinct, reporters asked her why she committed the homicide and if she regretted her action.

“You traitors should regret most!” she declared loudly. “You’re Chinese but you’re against the CCP! You’ve persecuted countless students to death.”

Some activists regard her comments as indicating it was a political murder. However, Bai said there must be complex causes behind the case, believing more details will surface as the investigation proceeds.

Meanwhile, Bai spoke of the covert influence of the CCP behind the homicide while reiterating the gravity of the CCP’s infiltration into the United States and other Western democracies.

“The CCP is shaking up the foundation of the United States,” said Bai. “The federal government has recently arrested several CCP secret agents. But it should do more, including special operations, to purge CCP agents and protect U.S. citizens and national security.”