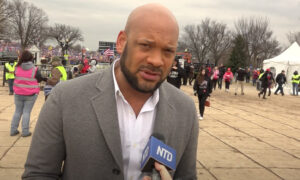 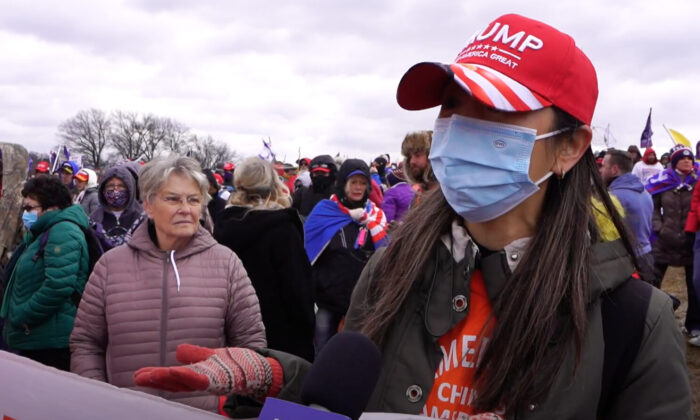 Chinese American: ‘I Cannot Accept This’

WASHINGTON—Xie immigrated to America from China eight years ago, and she said she can remember the moment and the culture shock with great clarity. In China, Xie did not join the Chinese Communist Party CCP, but she was completely familiar with the vicious and dishonest communist culture it perpetuated.

She and other soon-to-be citizens were asked to swear and oath, and under the CCP you would have been asked to pledge your life to whatever the Party wishes, Xie said.

So when the US immigration officers merely asked everyone to swear they would tell the truth, Xie was deeply moved. The very fact that America was a country that valued truth was so different from the communist culture she had known.

This was the first American election Xie had paid attention to, she said at a rally supporting President Donald Trump in Washington on Jan. 6. Hundreds of thousands were demonstrating that day during the joint session of Congress to count the Electoral College votes.

“I never thought this would happen, absolutely not,” she said.

On the night of the election Xie said she went to bed while Trump was still in the lead. The next morning, there were huge spikes in votes for Joe Biden in a few states, and Xie did a search for some answers.

“Even with just common sense you know that something’s wrong. I didn’t know what at first, but more and more the truth came out, and wow, it was fraud,” she said. “And the scale and magnitude of this fraud was shocking.”

She was reluctant to believe fraud had happened, especially at first, but as more and more evidence came out in public hearings, Xie was horrified. There were cases of fraud at every level and across the country, something she did not think could happen in America.

“I’m truly saddened by this,” Xie said. Her husband is an American and after the presidential election, they attended Stop the Steal protest in Harrisburg, Pennsylvania. Afterwards, she remember he sadly told her, “America is dead.”

“I have never seen him so despondent,” Xie said. It only quickened her resolve to protest election fraud.

Just as shocking as the fraud was the refutations and dismissals against the allegations, Xie added, as they were bald-faced lies made without conscience.

“I asked my husband, what are we going to pass onto future generations? If one person lies, it’s a lie, but if masses of people lie it’s supposed to be alright?” she said. “I cannot accept this.”

“To the world, America upholds integrity,” she said. She remembers the joy she felt when she first came to America, Xie said, pleasantly surprised to see people on the streets smiling and good natured. “But today everything has changed, and I cannot believe it, I cannot accept it.”

“I absolutely cannot accept lies, and I cannot accept a so-called president who uses lies to win an election,” Xie said. “Seriously, look at what a great nation this is. And Trump is an incredibly brave president, and the country needs such a courageous person who will not give up the fight for truth to lead a great nation.”

“We cannot have a coward, a liar, indeed a thief—can a great a nation as America accept a thief as their president? I don’t care if he had anything to do with arranging the fraud, or if he was aware of the arrangements, though honestly with just common sense it’s impossible that he wouldn’t know,” Xie said.

“So I really hope America can return to its right path. Go back toward God, and the Christian moral foundation the country was built on, and uphold these traditional values,” she said.

She hoped other Chinese Americans would take a stand during this time of crisis as well. Xie said many of them might have come to this country for economic opportunity or good schools for their children, but sooner or later they have to realize that if they don’t stand for the traditional moral values the country was built on, those freedoms fall away.

“Think about what you really came here for,” she said. “The values are truly what’s important … if you can make a lot of money here, but you don’t have the freedom to think what you want and say what you believe, honestly eventually that hurts your economic freedom too. If you don’t have freedom, you don’t have opinions and your own thoughts. Freedom is what is most important.”

Xie understands that a lot of Americans are still confused at this time; for example she has friends who say they also want the truth but are still waiting for mainstream media to reveal evidence of fraud before they can accept it. She tells people they should watch the public hearings to see the evidence for themselves instead.

“We have this kind of responsibility,” she said.

All Americans need to take a stand for what is true and right at this time, she said, but she understands why many people have become jaded, so she prays that God will help them see.

With reporting by Steve Wen.