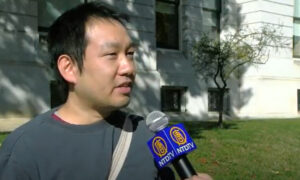 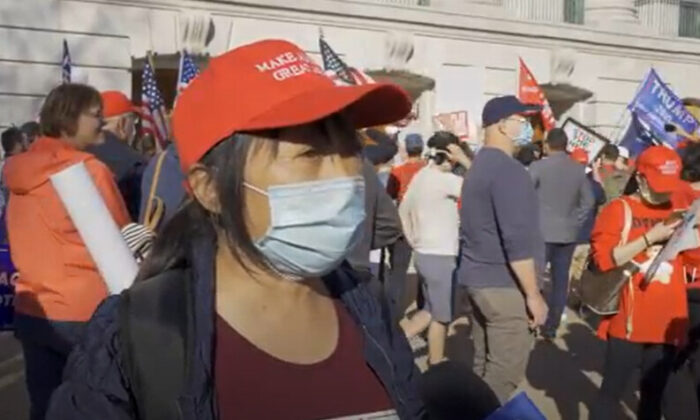 MADISON—Grace Jie drove three hours to protest in Madison, Wisconsin, because if the presidential elections are stolen it will be disastrous for the country, she said.

“I’m from Chicago, Illinois. There’s a protest in Illinois as well, but I think Wisconsin is even more important because of the fraud that’s happened here,” said Jie on Nov. 7, 2020 at a Stop the Steal rally.

“I can’t just watch this country go down the way of China, a communist country, because that where I came from, and I left searching for freedom. And let me tell you, finding that freedom is not easy. Just look at what is happening now, this issue today is no longer about whether you’re picking Trump or Biden as the president, this is a contest between good and evil. If Americans let this fraud happen, then it’s basically already a totalitarian state,” Jie said. If Americans let the fraud slide, “the system will have been broken” she said.

“When we moved here we were seeking this country’s freedoms, this freedom and liberty, and we can’t just watch this happen,” Jie said.

“If everyone stays home and just waits for someone else to take care of it, then it’s over, this country will be just like China,” Jie said, imploring Americans to step forward and fight for their freedoms. “That’s why today I’m here protesting, it’s the reason I drove three hours to be here.”

“All Americans know that fraud has occurred and we can’t sit by and let this election be stolen,” she said. “If the ballots of the dead people are counted too, how can this be a fair election? How can we let that stand? If we don’t stand against it then you’re just letting evil get away with fraud.”

Jie says supports President Donald Trump because he fights for those freedoms too.

“When Trump fights, it’s not for himself, he fights for the country. We’re not fighting for Trump personally, we’re fighting for him to represent us, to fight for us, that’s my view,” she said.

She wants to tell Americans that “you have to fight for your own freedoms, for your future.”