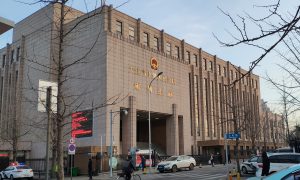 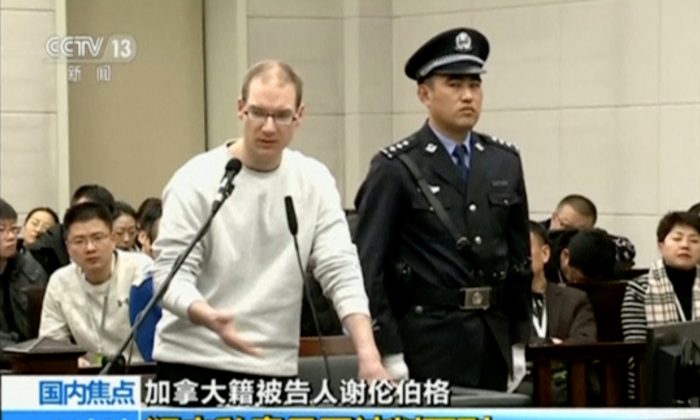 A still image taken from CCTV video shows Canadian Robert Lloyd Schellenberg in court, where he was sentenced with a death penalty for drug smuggling, in Dalian, Liaoning province, China, on Jan. 14, 2019. (CCTV via Reuters)
Canada

OTTAWA—Chinese ambassador Lu Shaye says Canada’s arrest of a Huawei Technologies executive was an act of “backstabbing” by a friend.

And Lu warns of “repercussions” if Canada bars the firm from its new 5G network for security reasons, as have three of its intelligence-sharing allies.

In a rare interview with Canadian journalists, Lu also told Prime Minister Justin Trudeau to back off recruiting international support in Canada’s feud with China. He said it would be a bad idea for Foreign Affairs Minister Chrystia Freeland to use the upcoming World Economic Forum summit in Davos to press that case.

Lu said economic relations between the two counties can be repaired and the current impasse could be resolved through negotiations, but he defended the arrests of two Canadians in China and criticized Canada’s arrest of the telecommunications executive, saying Meng Wanzhou didn’t break any Canadian laws.

Canada detained her in Vancouver last Dec. 1, at the request of American authorities who want her to face fraud charges for her dealings with American banks. She is out on bail and faces extradition proceedings.

China detained Michael Kovrig, a Canadian diplomat on leave, and Michael Spavor, an entrepreneur, after Meng’s arrest on vague allegations of “engaging in activities that endanger the national security.” Western analysts believe their arrests are an attempt to pressure Canada to free Meng entirely.

China also sentenced another Canadian, Robert Lloyd Schellenberg, to death on Jan. 14 in a sudden retrial of his drug-smuggling case. He was originally sentenced in 2016 to a 15-year term, but the court delivered the new sentence after reconsidering his case.

Irwin Cotler, the founder of the Raoul Wallenberg Centre for Human Rights, took China to task for characterizing Canada’s arrest of Meng as “vile, unconscionable and evil.”

“These words define and describe China’s hostage diplomacy ever since—including its detention of Canadians Michael Kovrig and Michael Spavor and the arbitrarily cruel death sentence of Robert Schellenberg,” Cotler said in an email to The Canadian Press.

“But nothing exposes and unmasks China’s contempt for the rule of law, in China as well as in Canada, and its own ‘vile, unconscionable and evil’ conduct than its cruel and inhumane treatment of Ti-Anna Wang and her infant daughter,” Cotler said.

Last week, Wang arrived in southern China where her father, Wang Bingzhang—considered to be the father of China’s ill-fated international pro-democracy movement—has been jailed since Chinese agents snatched him in Vietnam in 2002 and hauled him back to the People’s Republic.

China has consistently denied Wang’s attempts to visit her father for almost a decade, as his health has been declining.

In August, Wang was given a fresh Chinese visa, but when she arrived in southern China last week with her husband and 11-month-old daughter, she was turned away after a six-hour airport ordeal. She was sent back to South Korea, where she had been visiting her husband’s family.

On Jan. 16, as she and her family were changing flights in Beijing on their return trip to Canada, Wang said half a dozen Chinese agents boarded her flight, took her and her daughter into custody, and separated them from her husband.

Two hours later they were forced onto a different flight and sent back to South Korea. Wang’s family had to rebook their travel back to Montreal on a new flight from South Korea that took them through the United States.

“Unlike last time, no questions were asked. I wasn’t allowed to use my phone or computer, or contact the Canadian Embassy. I couldn’t consult with my husband, whom I didn’t see again until we were being escorted to the gate, or contact Air Canada to rebook my flight,” Wang said in an email from South Korea.

“It was a shocking, terrifying and senseless ordeal with no purpose but to bully, punish and intimidate me and my family,” she wrote.

Canada’s foreign ministry had no comment on Wang’s treatment by Chinese authorities.