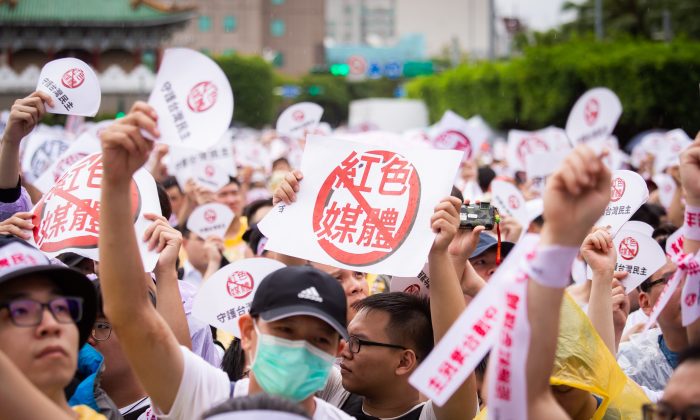 Tens of thousands showed up on the street to protest against pro-China media in Taiwan on June 23, 2019. (Chen Bozhou/The Epoch Times)
Asia & Pacific

Chinese Ambassador Says Taiwanese Who Pushed For Independence Will Be Punished

The Chinese Ambassador to Australia has explained that Taiwanese who seek independence would be punished if China took control of the area.

Ambassador Xiao Qian said that the secessionists who sought to move Taiwan toward independence would be punished by the Chinese regime when the country was “reunified” with the mainland.

The comments follow remarks made by the ambassador during an address to the Australian National Press Club on Aug. 10, when Australian journalists pressed the Chinese Communist Party’s (CCP) representative about the current tensions in the Taiwan Strait.

The CCP ambassador said it was his personal understanding that if an invasion was successful, its citizens would undergo “re-education.”

He said that Taiwan had been run by “a regional regime for many decades” and that “their perspective” about Mainland China might have different views, requiring “a process for the people in Taiwan to have a correct understanding of China.”

The comments from the ambassador mirror those made on Aug. 7 by the Chinese ambassador to France, Lu Shaye, who told French media outlet LCI that if Beijing were to take over Taiwan, its 23 million residents would undergo re-education—echoing the situation faced by Uyghurs in Xinjiang.

The use of the term re-education has sparked global concerns after reports from the United Nations found that the scale and brutality of the detentions, framed by CCP authorities as compulsory reeducation camps or “vocational skills education centers,” likely qualified as a crime against humanity.

“The extent of arbitrary and discriminatory detention of members of Uyghur and other predominantly Muslim groups … may constitute international crimes, in particular crimes against humanity,” the report said.

The report based its findings on statistical analysis, satellite imagery, CCP documents, and 40 interviews with Uyghurs and other affected individuals.

Re-education camps have been utilised by the Communist regime as a means of repression of those groups it deems a threat. Over the course of the communist rule, those targeted for re-education have included Uyghurs, Muslim ethnic minorities like Kyrgyz, Uzbek and Kazakh, Tibetans, religious adherents including house Christians and Falun Gong, and political dissidents.

In an interview with The Epoch Times, American Thought Leaders program, the commissioner on the U.S. Commission on International Religious Freedom (USCIRF) Nury Turkel said that the CCP used thought transformation as a way of assuring it maintained control over the population of China.

“The Chinese government, particularly the current government under Xi Jinping leadership, see anything that creates resentment against the Chinese government or anything different than what they’ve been promoting specifically in an ideological front, the term that they use a lot can be seen as a source for potential unrest. Calls for future instability to the Communist Party,” Turkel said.

“To the Chinese State, stability is a paramount concern. They will do anything.”