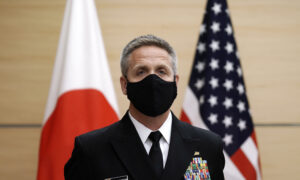 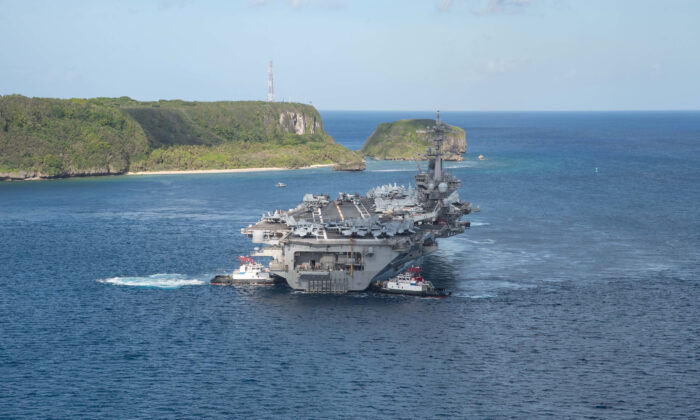 It is uncommon for the Chinese Communist Party (CCP) to release information about aircraft carrier training in a timely manner. However, the news reports were full of contradictory information. The title of Xinhua’s report implied that the Liaoning took part in an open sea exercise, but the content was about offshore routine training near Taiwan. So, is the aircraft carrier ready for combat in the open seas?

Is the Liaoning Capable of Open-Sea Operations?

According to the PLA Navy’s statement, the exercises near Taiwan were aimed at enhancing their “capability to safeguard national sovereignty, security, and development interests.”

The CCP’s intention to form an aircraft carrier fleet is, of course, to compete with the United States for sea power in the Pacific. Aircraft carriers are indeed used for ocean warfare, not for offshore defense. More precisely, the aircraft carrier fleet serves large-scale naval battles in the ocean, and used as a floating base for air strikes away from the homeland against enemy countries.

Therefore, if the Liaoning conducts an open seas training, it should at least travel further south to the Philippine waters, away from the offshore waters.

For conventionally powered aircraft carriers, sailing from the Bohai Sea to the Taiwan Strait and to China’s island province of Hainan is actually considered a long voyage. Although the fleet has supply ships, the fuel it carries is limited. When less than half of the fuel is used, it must return to the carrier base before the fuel runs out. The frigates also need to refuel.

On April 6, Xinhua reported the first domestically-built aircraft carrier Shandong. It claimed, “The Shandong is like a city floating on the sea” and “a symbol of comprehensive national strength.”

Xinhua’s reports were meant to show that the CCP already has two aircraft carriers—the Shandong and Liaoning. But, it’s highly questionable if these carriers are capable of operating away from home.

Three months ago, Shandong arrived at a military port in Sanya, Hainan Province.

The People’s Liberation Army (PLA) Navy could have intimidated the U.S. aircraft carrier. But, we know the PLA would not dare and the reasons are obvious.

If the Liaoning and the Shandong were dispatched together, it would likely expose the actual number of J-15 carrier-based aircrafts in service. In July 2020, Japan’s annual white paper “Defense of Japan 2020” revealed that the PLA had 20 J-15 fighter jets at the time, which would not even fill one aircraft carrier. In the past nine months, there has been no news of any increase of J-15s. It means that there is no mass production of the J-15 due to production and quality issues. Production may have been hampered due to the lack of core components such as semiconductor chips. In 2020, the Trump administration added dozens of Chinese companies, including a top manufacturer of semiconductors, to a trade blacklist due to national security concerns. Of course, the CCP will not expose such weaknesses.

CCP’s Aircraft Carrier Is Useless in the Taiwan Strait

Changing the high-profile cross-sea exercises of the Liaoning to routine training in the waters around Taiwan is perhaps a way to avoid embarrassment. The U.S. military announced that the USS Theodore Roosevelt Carrier is going back to the South China Sea from the Indian Ocean. What if the Theodore Roosevelt goes straight toward the Liaoning? The PLA Navy may have to end training and return home to avoid direct confrontation with the U.S. aircraft carrier.

This shows that the PLA’s aircraft carrier can’t serve well away from home, and may not be “a symbol of comprehensive national strength.”

The distance between Taiwan and mainland China is only 130 kilometers (about 81 miles) from the nearest point. If the PLA Navy really attacks Taiwan, land planes would be able to arrive shortly. The use of aircraft carriers would be superfluous.

Although the Chinese aircraft carrier fleet can circumvent the eastern part of Taiwan, it has to guard against Taiwan’s missile speedboats, F-16V fighter jets, and land-based anti-missile ships. In fact, the PLA dare not approach and it would be risky to deploy carrier-based aircrafts. Furthermore, the fleet still needs to replenish fuel and it may have to return after less than half a month. The gain is not worth the loss.

Submarines are also terrible enemies of the aircraft carrier fleet. The CCP’s anti-submarine capabilities are still unable to meet actual combat requirements. The arbitrary deployment of the aircraft carrier fleet actually faces huge risks. In addition, the CCP’s latest Type 055 destroyer and Type 052D destroyer do not have a proven mid- and long-range missile interception system. Their radar performance and defensive capabilities cannot be compared with the U.S. Aegis combat system, and their use in escorting aircraft carriers is merely a show. This is another major weakness of the CCP fleet.

I believe the CCP’s Military Commission will keep an eye on the movements of the U.S. Navy, and the Liaoning would retreat once the Theodore Roosevelt approaches. Xinhua’s report has actually laid the groundwork—the CCP can always claim that the mission of routine training has concluded. If the U.S. aircraft carrier continues to stay in the South China Sea, the Liaoning could go to the Philippine Sea before returning home.

It is not entirely impossible for the Liaoning to enter the South China Sea. If the Chinese regime conducts a dual aircraft carrier exercise in the disputed waters, it could result in dire consequences for the region.