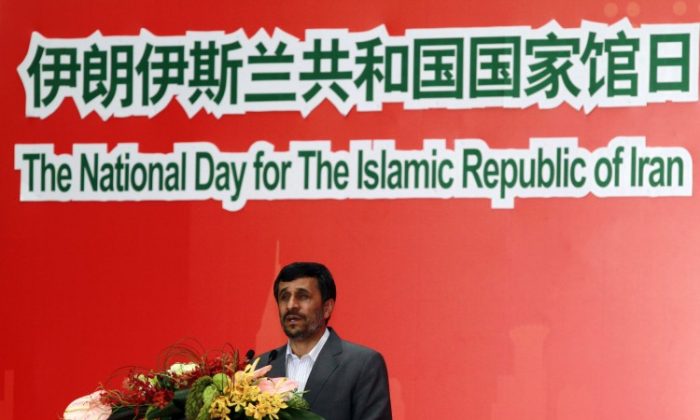 Iranian President Mahmoud Ahmadinejad gives a speech to mark 'Iran Day' during a visit to the World Expo in Shanghai on June 11, 2010. (AFP/Getty Images)
China

As the United States and other nations grapple with how best to stop Iran from acquiring a nuclear weapon, a high-ranking Chinese military official has raised the stakes considerably on any possible military action.

On Dec. 4, according to a report in Press TV, a news network owned by the Iranian government, Chinese rear admiral and prominent military commentator Zhang Zhaozhong said, “China will not hesitate to protect Iran even with a third world war.”

Apart from being a rear admiral in the Chinese navy, Zhang is the director of the National Defense University Military Logistics and Equipment Department. He maintains nationalistic military blogs that receive millions of viewers and is also well known as a commentator who appears regularly on the state-run China Central Television (CCTV). In 2006 he began hosting a CCTV-7 program called “Defense Review Week,” according to a research report by the Open Source Center. Efforts to reach Zhang were unsuccessful.

Zhang has expressed concerns about a war centered on Iran in the past.

In his book, “The Next War,” published in 2009, Zhang predicted that Iran is likely to be the target of the next war. In Zhang’s view, though the United States and Iran may have diplomatic negotiations, it is impossible for Iran to give up uranium enrichment and its nuclear program.

On a CCTV program on Nov. 8 Zhang said that the countdown for an Iran war had already started. He said that if the forthcoming International Atomic Energy Agency (IAEA) report on Iran’s nuclear program concluded that Iran is seeking to develop nuclear weapons, that may trigger a new round of sanctions on Iran or even lead to military action.

On that program Zhang referred to an article in Israel’s Jerusalem Post, which suggested that Russia is only a superficial supporter of Iran, while China is Iran’s real pillar. Zhang said that China is even willing to open up a land passage to Pakistan in order to aid Iran directly.

Iran has important strategic value for China. China has a rapidly growing demand for oil and imports 10 percent of its crude oil from Iran, which is China’s third largest supplier, according to Reuters.

China is Iran’s biggest crude oil buyer, and Iran needs all the friends it can get. As the controversy over Iran’s nuclear weapons program has grown it has become increasingly isolated, making its relation to China all the more important to Iran’s rulers.

The IAEA report, which was released on Nov. 8, prompted the IAEA Board of Governors to express “deep and increasing concern about the unresolved issues regarding the Iranian nuclear program, including those which need to be clarified to exclude the existence of possible military dimensions.”

The United States, the European Union, and Canada have since imposed tough, new sanctions aimed at crippling Iran’s petroleum industry. In the last few weeks mysterious explosions have struck an Iranian missile development site and a uranium conversion facility, prompting the Israeli newspaper Haaretz in a headline to proclaim “The War Against Iran’s Nuclear Program Has Already Begun.”

Joseph A. Bosco, a national security consultant and former China country desk officer in the office of the secretary of defense, said he was disturbed by Zhang’s remarks but not surprised.

“China has protected Iran as it has other countries who are opposed to the United States,” he said in a telephone interview.

According to Bosco, the thinking in China is, “The enemy of my enemy is my friend.”

Bosco argues that the fact that in at least one case a general was promoted after making a saber-rattling statement adds significance, if not the official imprimatur, to such public rhetoric.

“If an American General made such statements, he would not long retain his position,” he said.

In 1995 the Chinese Communist Party (CCP) fired missiles toward Taiwan to protest a U.S. visit by Taiwan’s president; the United States sent aircraft carriers to the region in response.

In that context, Chinese Gen. Xiong Guangkai told Chas Freeman, who was previously an assistant secretary of defense in the United States Department of Defense, that China would attack the United States—possibly with nuclear weapons—if a war over Taiwan broke out.

“In the end you care more about Los Angeles than you do about Taipei,” Freeman later quoted Xiong saying. Freeman was not available for comment.

In January 1996 Xiong Guangkai was promoted to assistant chief of staff of the People’s Liberation Army (PLA), according to his official vita.

In 2005 he told a Wall Street Journal reporter, “If the Americans draw their missiles and position-guided ammunition on to the target zone on China’s territory, I think we will have to respond with nuclear weapons.”

He added that the Chinese “will prepare ourselves for the destruction of all of the cities east of Xi’an. Of course the Americans will have to be prepared that hundreds … of cities will be destroyed by the Chinese.”

Zhu kept his post in the PLA and at the National Defense University, though he later received an official light reprimand.

The warlike rhetoric of Zhang, the defender of Iran, has found some skepticism on China’s Internet.

One netizen wrote in a blog post, whoever gets support from Gen. Zhang ends up with bad luck.

Another netizen commented, “If this is true, Iran is in danger. … Our country should pledge not to use Admiral Zhang first.”

Matthew Robertson
Follow
Matthew Robertson is the former China news editor for The Epoch Times. He was previously a reporter for the newspaper in Washington, D.C. In 2013 he was awarded the Society of Professional Journalists’ Sigma Delta Chi award for coverage of the Chinese regime's forced organ harvesting of prisoners of conscience.
More articles from this author
Six Ways to Stop Organ Harvesting in China
sharecomments
Falun Gong Practitioners Compare Notes About Ending Persecution
sharecomments
Chinese Dissent in an Age of Social Media
sharecomments