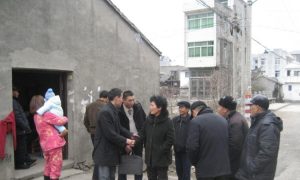 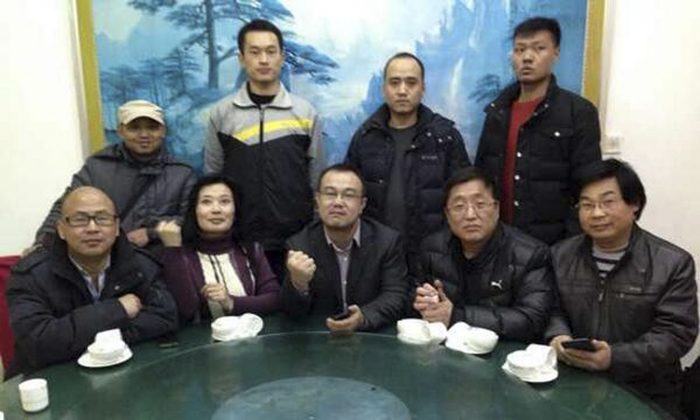 In this Feb. 1, 2014 photo released by Citizen Watchers Group, nine members of the spontaneous formed group convene at a restaurant to demand a thorough investigation into the death of Xue Fushun, a fellow activist’s father, in Qufu, in eastern China's Shandong province. The Qufu gathering was triggered by the sudden death of Xue Fushun, the father of Xue Mingkai, a dissident who has been jailed twice for his opposition to China’s one-party rule and who is now feared detained by authorities. (AP Photo/Citizen Watchers Group)
China

The mysterious disappearance of activist Xue Mingkai on the way to the funeral of his father in Qufu in eastern China’s Shandong Province is the latest twist in a story of mysterious deaths and disappearances that began on Christmas Day 2010, with the suspicious death of a village headman.

Xue’s friends lost contact with him after he left his hotel to catch the train to Qufu to attend the funeral, activist Qin Yongming told Radio Free Asia (RFA). Although he was using a new cell phone, which would make him more difficult for security services to track him, friends think he was located by police when he used a chat service to send a message. He had been in hiding since he was released from prison in September 2013.

“Everyone is very worried about Xue Mingkai right now. We haven’t been able to get in touch with him [by any means],” Zhang Junjie, a rights lawyer currently in Shandong, told RFA. Xue’s cell phone was switched off on Sunday.

“I wouldn’t be at all surprised if he has been detained,” family friend Qian Jin told RFA.

Xue Mingkai’s father died in Qufu on Jan. 29 under suspicious circumstances. Xue Fushun and his wife, Wang Shuqing, had been detained in a black jail as authorities sought to force them to reveal the whereabouts of their son, according to Human Rights in China (HRIC).

According to official statements Xue Fushun committed suicide. However, neither Xue Mingkai nor Wang Shuqing believe that it was suicide, and they made a public statement to Human Rights in China (HRIC) to that effect on Feb. 3.

Shortly after the making the HRIC statement, Xue Mingkai went to ground in a secret location, and Wang Shuqing disappeared, detained by police at constantly changing locations. Activists and lawyers from around China converged on Qufu to investigate the death and the disappearance, but many of them were rounded up by the police and put on trains back home.

Beijing-based rights lawyer Jiang Tianyong met with Xue Mingkai at a secret location after he made the HRIC statement, and compared the detention of Wang Shuqing to that of activist Chen Guangcheng.

“It’s the same attitude as when they arrested Chen Guangcheng, Chen’s mother, and his wife Yuan Weijing,” Jiang said. Chen was kept under house arrest for more than 18 months in a village only about 80 miles from Qufu, until he and his family members escaped in late April 2012.

“If Xue Mingkai were to go back now, he’d be ‘disappeared,’”Jiang correctly predicted.

Xue’s activism has been a problem for the Chinese regime for years. He was arrested in April 2011, and later imprisoned until September 2013, on charges of “incitement to subvert state power” due to his deep involvement with the banned China Democracy Party and his investigation into the death of elected village chief Qian Yunhui.

Qian, who was well liked for protesting official corruption in his area, died under the wheels of a truck on Christmas Day of 2010; witnesses say he was knocked down and held under the wheels of the construction truck, which crushed the life from him. The official version of the death was that it was a “traffic accident.”

Rights lawyers are filing lawsuits against Qufu authorities in the matter of Xue Fushun. Lawyer Lin Lei said Wednesday that they were currently submitting evidence. The statements by the authorities are unclear, and it is impossible to tell whether it is a suicide or a homicide, she told Radio Free Asia (RFA).

“They certainly do not want so many lawyers get involved, ” Lin pointed out.