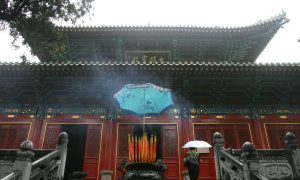 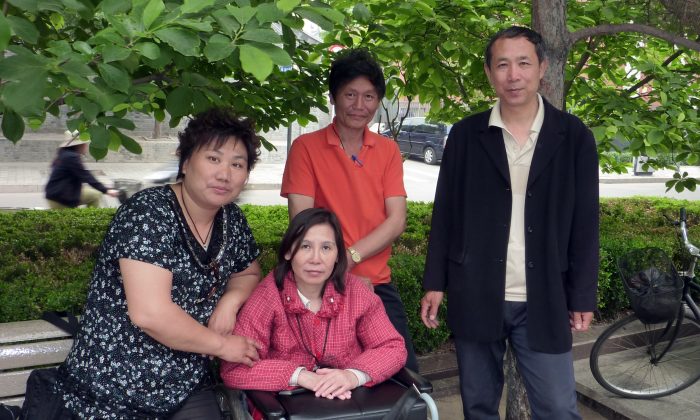 Ni Yulan (C) and her husband, Dong Jiqin (2nd R), pose with a supporter during an interview at the Imperial City Heritage Park in Beijing, May 27, 2010. Ni was released on Oct. 3 after serving a two-and-a-half-year sentence for her human rights activism. (Robert J. Saiget/AFP/Getty Images)
China

Ni Yulan, a well-known property rights activist who was tortured and beaten so badly by police that she now gets around in a wheelchair, has been released after two years in prison. After being greeted by family, friends, and journalists from abroad on Oct. 5, she vowed to continue her work defending those who have been at the wrong end of the power wielded by the Chinese Communist Party.

Ni, a human rights lawyer, was first arrested in April 2002 when she campaigning to help residents in Beijing’s Xicheng District who were being forced to vacate their homes. The police detained her when she was taking pictures at the scene, and a number of thugs stole her camera.

It turned out that the thugs were district Communist Party Secretary Zhang Yulan, and a staff member from the local Relocation Office, Ni wrote in a 2005 letter.

“I’m finally free! I miss my friends so much,” Ni told Chinese Human Rights Defenders, a civil rights network, in a telephone call. “I thank everyone for their concern and appeals.”

While in detention in 2002, Ni had her knees and feet broken by Beijing police, and she is now confined to a wheelchair or crutches. In her letter, she recounted how she was tortured, and also how she developed friendships with fellow prisoners. Many of them were practitioners of Falun Gong, a spiritual practice that was banned by the regime in July 1999.

“They had been kidnapped from all over the nation,” Ni wrote. “They were a group of people who practiced cultivation for both mind and body in order to improve themselves. … Because of their belief, they were often mistreated, suffering physical and psychological torture.”

“I lived with Falun Gong practitioners for one year. I was hurt seriously during that time, and they took turns caring for me day and night,” Ni wrote.

In 2010, authorities forced Ni and her husband Dong Jiqin, to stay at a black jail—in this case, a hotel controlled by the police—after their home was demolished in 2008. Black jails are extralegal detention sites used to hold protesters and petitioners, denying them legal representation.

In 2011, Ni was again arrested for “public disturbances” and served a two-and-a-half year sentence.

Talking about her future plans, Ni said in a Radio Free Asia report: “We will continue to appeal and take legal action. It’s not easy to protect peoples’ rights.”

A neitzen remarked: “At the police station, she was handcuffed to a heating radiator. A policeman urinated on her. When she screamed, she was charged with assaulting a police officer. She was crippled in prison. Her house was forcibly demolished. Please remember this woman—she deserves the respect of every Chinese. In the future, Ni Yulan’s name will be in Chinese textbooks.”

In August, Uzra Zeya, acting secretary of State for Democracy, Human Rights and Labor, criticized the Chinese regime over its dismal human rights record, and cited the detention of activists, including Ni Yulan.