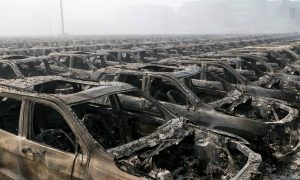 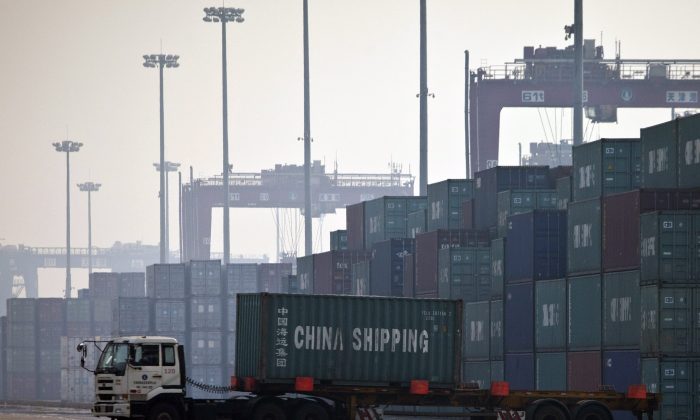 A truck transports a container to be loaded onto a ship at a port in Tianjin, China in this undated photo. (Alexander F. Yuan/AP Photo)
China Society

Authorities in Tianjin announced on Nov. 8 that the Chinese city is under a state of emergency and has entered “wartime status” after two COVID-19 cases were confirmed. Chinese media reports claimed that the two patients contracted the disease from a cold storage facility in Tianjin.

According to mainland Chinese media reports, on the evening of Nov. 7, authorities in Dezhou city in Shandong Province confirmed that a batch of frozen pork imported from Tianjin Port tested positive for COVID-19.

The patient lives on Hangu Street, Binhai New District, Tianjin, and had contact with imported cold chain food 14 days before the onset of illness. On Nov. 4, he transported imported frozen food for the company and had close contact with eight people living in the same dormitory, according to media reports.

On Nov. 8, the patient tested positive for COVID-19 and was transferred to Haihe Hospital by ambulance. A chest CT showed that his lungs had ground-glass opacity in several areas—a common symptom of the coronavirus.

On Nov. 9, an asymptomatic case of COVID-19 was confirmed. The patient was from Henan Province but temporarily living in Lingang Road, Binhai New District of Tianjin city. The man drove a truck to Hailian Cold Storage to load food at about 11 a.m. on Nov. 5. Although the patient was not a cold storage worker, he was in contact with the facility. The man also drove to the Tangguantun service area in Jinghai district.

When The Epoch Times contacted the Jinghai District Center for Disease Control and Prevention (CDC) on Nov. 9 for more information, the staff told the reporter to read the official statements. When the reporter asked about the status of the infected loading worker and how he contracted the coronavirus, the staff said he did not know and even if he did, he couldn’t tell the outside world.

On Nov. 8, Tianjin officials held a press conference to announce the new COVID-19 cases and declared the city is under a state of emergency and has entered a wartime mode.

An employee of a cold storage facility in Beichen district, Tianjin told The Epoch Times that the cold storage company he works for is still recruiting workers; but due to the impact of the pandemic, the new recruits will have to wait a few days before they start working. The exact start date is not known.

When the reporter asked some residents about the state of emergency in Tianjin, they said that daily life continues as usual.

A business owner in Binhai New Area told The Epoch Times, “[The new case confirmed today and the eight people confirmed previously] all worked at the same cold storage plant. Although nucleic acid testing is being done in many places, our area has not been notified to start doing it. People go to work as usual.”

Li Wen (alias), a resident of Nankai district, said that his community has not yet received a notification to start nucleic acid testing. He said, “The officials have some internal information about the outbreak that is not allowed to be made known to the public. They are very nervous.”

The wife of Li’s friend works in Tianjin Haihe Hospital. Recently, Li heard that the hospital moved some patients out to accommodate and treat COVID-19 patients.

He said that Haihe Hospital specializes in tuberculosis and is one of the main infectious diseases hospitals that administer the treatment of COVID-19 in Tianjin.

Li also revealed that Tianjin has been taking in foreigners who entered China at the Beijing airport. There is a hotel in every street to receive foreigners for quarantine who usually stay for more than ten days.

Hong Ning and Fang Xiao contributed to the report.