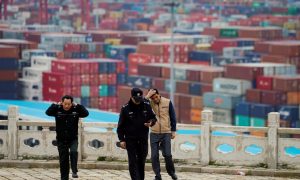 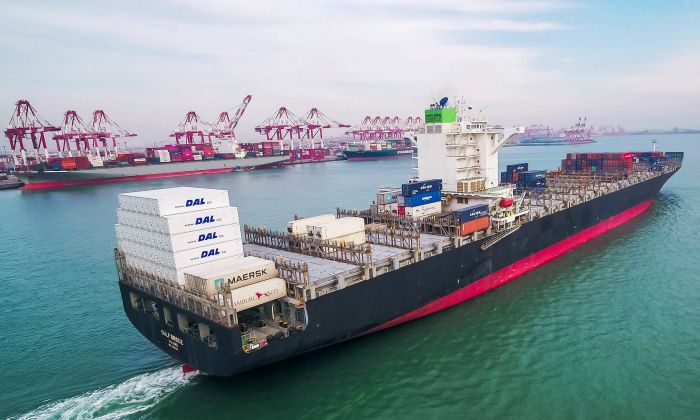 To avoid the high tariff, there are more and more Chinese products transshipped to a third country before ship to the United States. (STR/AFP/Getty Images)
China

China’s Textile and Garment Industry Is in Deep Trouble

Under the impact of the Sino-US trade war, China’s economy has continued to decline. Domestic demand is weak, foreign trade is stagnant, and China’s textile and garment industry is in deep trouble after a wave of production closures.

According to official statistics released by China Customs on June 10, China’s total import and export value in the first five months was $1.79 trillion, down 1.6 percent from last year. China’s exports to the United States declined by 8.4 percent year-on-year, and imports fell even more, declining 29.6 percent year-on-year. In May alone, China’s total import and export value was $386.03 billion, falling 3.4 percent. Within this, exports increased by 1.1 percent compared with the same period last year while imports fell by 8.5 percent.

Some analysts pointed out that China’s year-on-year increase in May exports was due to the rush to export before new U.S. deadlines to impose a tariff hike on $200 billion of Chinese goods.

Xie Tian, a professor at the University of South Carolina’s Aiken School of Business, believes that exports increased slightly in May, and that most products originally flowing to the United States have been redirected to other countries.

He told The Epoch Times that it would still be difficult to maintain the long-term growth of exports. “Because no country has the market and purchasing power of the United States, and no country is able to tolerate China’s surplus other than the United States,” Xie said. “For instance, if China’s exports to other countries such as in Southeast Asia, Europe, and the Middle East increase, then imports will also inevitably increase. These countries will not tolerate a large surplus like the United States, so China’s exports will still have problems.”

Mr. Chen, the owner of a Hunan Province-based clothing business, told The Epoch Times that July and August are generally the textile industry’s offseason, with most going on holiday. But this year has been one month ahead of schedule.

Starting in June, many garment factories were already on vacation, “especially for those doing foreign trade. The trade war has had a great impact on coastal export enterprises,” Chen said. “My wife’s uncle works on denim clothing for export to the United States in Shenzhen, Guangdong. There have basically been no orders this year, and it is already difficult to maintain the factory.

Chen said that at the end of December 2018, in order to purchase fabric to produce 2019 spring and summer children’s clothing, he made a special trip to the Shaoxing Keqiao textile fabric wholesale market. The owner of a fabric production factory told him, “Since the trade war began, many large garment factories along the coast that export to the United States have gone bankrupt because U.S. buyers no longer purchase from China. There have been no orders for the fabric factories here either, and more and more factories are closing.”

Zhejiang Shaoxing Keqiao Textile City is China’s largest textile trading market, with most of its products aimed for export. Chen said that there were originally tens of thousands of enterprises there, but it feels as if one-third of those enterprises have closed. “A large number of manufacturers have closed, one after another. Many cloth manufacturers I knew before have also closed. You see the words ‘rental transfer’ written on their doors,” Chen said.

When speaking of the reasons for the collapse, Chen said, “The greatest impact is this U.S.-China trade war. Cloth is a labor-intensive industry, and profits are not high. Countries like the United States don’t produce it themselves; they get all of it from China. U.S. businesses are no longer buying from China. Without orders, manufacturers are of course closing.”

According to customs data from April and December 2018, the overall export of China’s textile industry twice showed negative growth. Huizhou, Guangdong Province-based business owner Mr. Zeng told The Epoch Times that his friend in the recycling equipment business told him that many textile factories in Guangdong have closed down since the trade war.

“He bought a lot of equipment, but now he can’t sell it. No one is willing to open a factory anymore,” Zeng said.

The United States is China’s largest market for textile and apparel exports. China National Cotton Information Center disclosed that Henan Province-based textile enterprises say that textile companies are now under pressure on two ends. On one hand, the price of raw materials purchased in the previous period have increased, which directly increases production costs. On the other hand, sales have been blocked, and downstream customers don’t quote prices or make purchases. In mid-May when the Chinese and U.S. sides began imposing tariff hikes on each other, cotton yarn sales had already stagnated.

The uncertain outlook on trade has made manufacturers too afraid to take orders. Some companies stopped production for a month in June due to the running costs of hundreds of thousands of dollars per day; smaller businesses have long closed production.

Henan business owners expressed that the impact of the Sino-U.S. trade war on the cotton spinning industry chain has far surpassed industry estimates.

In the first quarter this year, China’s share of U.S. apparel imports declined slightly. U.S. imports of Chinese clothing have stagnated, and the proportion of many categories of Chinese clothing have declined by double digits. Imports from other countries have increased. Yet after the tariffs increase, it is expected that the rate of decline will further increase, and exports to the United States may decline precipitously.

Chen said that there another reason for the large number of garment factories going on holiday in advance is inadequate domestic consumption. “The children’s clothes I make are basically all sold in China. We basically have no orders now, and if we don’t have an order, we don’t dare do it, because if we do it, we will lose money.”

“If we produced 20,000 pieces there, perhaps nobody would buy them even when we sell at a loss of 3 to 5 yuan. A lot of people are unemployed, everyone generally has no money, consumption is weak, and the whole economy is weak.”

Manager Liu of a textile company of Xiangyang City, Hubei Province, who is running a shop at the Keqiao textile fabric wholesale market, told The Epoch Times that when the overarching business environment is not good, no business does well.

“It is now a buyer’s market. It is easy to spend money and hard to make money. Many factories have been shut down here,” Liu said.

A report by Capital Futures, a China-based research firm, pointed out that a pessimistic atmosphere is permeating in the Chinese textile industry, and end consumption continues to weaken. According to the report, May to July is the traditional off-season of the textile industry. But under the bleak trade prospects, overseas orders have decreased sharply. Some export-oriented enterprises indicated that orders in August and later have shrunk significantly. The signs of shifting to Southeast Asia are very prominent, which directly affects the demand-consumption of cotton and yarn.

The report also said that domestic textile and apparel market consumption continues to be weak. Due to the decline in demand, the passive storage of finished products is a serious problem. Inventory of most textile enterprises increased by more than 50 percent compared with the same period last year. The inventory of individual enterprises increased by 10–15 days’ sales compared with the same period in 2018, with some even exceeding 40 days.

The daily increase in cotton and yarn storage has created difficulties for the capital flow of some textile mills to the point of being unable to collect money to buy lint cotton. Some small factories have stopped production, and many have reduced production time for work shifts. Most companies are pessimistic about the overall prospects of the textile market in the second half of the year.