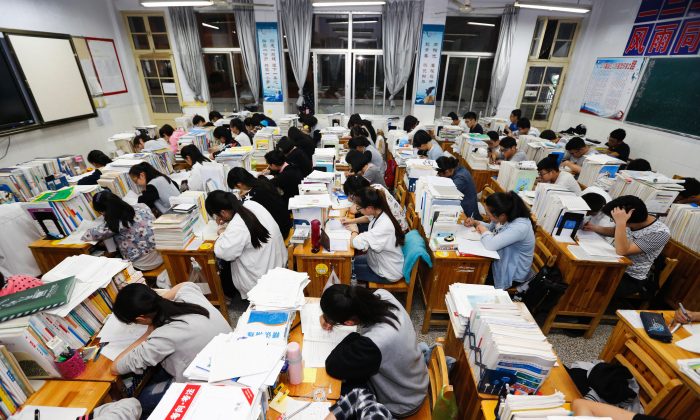 China’s “social credit system,” reminiscent of a dystopian nightmare, has invaded yet another level of Chinese citizens’ lives: determining where their children can go to school.

In 2014, the Chinese regime first rolled out plans to create a social credit system, which ranks each citizen based on their levels of trustworthiness and compliance with the regime’s rules.

Infractions like jaywalking, smoking in public, or posting content on social media that the regime disapproves of, would have an adverse effect on the person’s credit score. In turn, the lowered score would mean travel restrictions, as well as limits on shopping purchases, what hotels you can book, what jobs you can apply for, and other punitive measures.

A recent report in state-run newspaper The Paper revealed that a high school in Changle County, Shandong Province, has announced that the school would not enroll students whose parents have bad social credit scores.

The school posted its policy on its website on April 21, explaining that in 2002, the school had transitioned from a public school to a privately operated school, and hence was required to abide by local authorities’ rules about private school enrollment.

“Regarding people who have serious trust-breaking behavior, privately operated schools must limit their children’s ability to attend high-tuition private schools, to practically carry out the responsibility of disciplining people with bad credit,” read the authorities’ rules.

Netizens who saw the news expressed their displeasure at children being punished for their parents’ transgressions.

In March, the regime announced that starting May 1, the country will implement a travel ban for people with recorded misdeeds.

In Guangdong Province recently, the authorities announced that it would keep track of motorists who ran red lights or were discourteous at pedestrian crossings. The records would be entered into WeChat, a popular social media platform, which will then send the information to credit score institutions—to restrict online purchases and loans.

The social credit system, slated to be fully running by 2020, is becoming ever more omnipresent. A 2016 policy announcement from central authorities outlined constraints on nearly every aspect of a low-credit-scoring citizen’s life, from purchasing insurance to what types of homes one can own.

The Beijing News newspaper reported last year that 17 individuals were prevented from applying to college because they refused to enter military service.