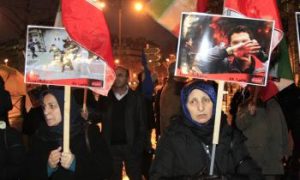 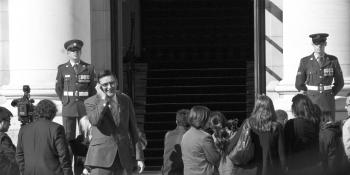 [xtypo_dropcap]L[/xtypo_dropcap]i Changchun is accused of terrible crimes. In his role as head of propaganda in China, he has shaped public opinion about the crackdown in Tibet during the Olympics, the crackdown on Uighurs, and the ongoing eleven year oppression of the Falun Gong spiritual movement. Before his current role, he was responsible for a region of China that was among the most brutal in implementing the persecution of Falun Gong practitioners in China.

Yet when he visited Ireland last week, the Irish media and government were silent about his alleged crimes, and the Irish government even stopped media critical of the current Chinese Regime from entering a press conference with Li Changchun.

Since 2002, Li Changchun has been responsible for all the propaganda produced and propagated by the Chinese Communist Party (CCP). Material produced from his office was used to shape public opinion during the Olympics, when there was a crackdown on anti-regime protests in Tibet. The role of his department was to convince the people of China that the crackdown was necessary to keep the monks of Tibet from interfering with the Olympics.

The latest report issued by Amnesty International about China, published in 2009, said, “The Olympic Games in Beijing brought heightened repression throughout the country as authorities tightened control over human rights defenders, religious practitioners, ethnic minorities, lawyers and journalists.” This makes one wonder why the Irish government would soften its approach in urging the Chinese Regime to improve the human rights situation of the average Chinese citizen.

As the tanks and army rolled into Tibet during the Olympics and foreign nationals and media were flushed out, Li Changchun's propaganda machine's job was to convince the Chinese population why such actions were necessary – opposing views were not tolerated, and all witnesses to what was really happening were removed.

Amnesty said in its 2009 report, “The authorities maintained tight control over the flow of information, with many internet websites blocked, and journalists and internet users harassed and imprisoned for the peaceful expression of opinions.”

When any criticism is raised about the CCP or any of its actions, or if the CCP wishes to target a group of people to persecute, Li Changchun's department provides the ground-work by making up stories that support the Chinese regime's line, and feeding them to the Chinese population through the media, which is heavily influenced, and often directly controlled by the Party-state. After this has been achieved, the judiciary in China trump up charges in line with the propaganda to imprison people.

Amnesty International said in its report, “The authorities continued to use broad and vaguely defined provisions of the criminal law relating to state security and ‘state secrets’ to silence dissent and punish human rights defenders.”