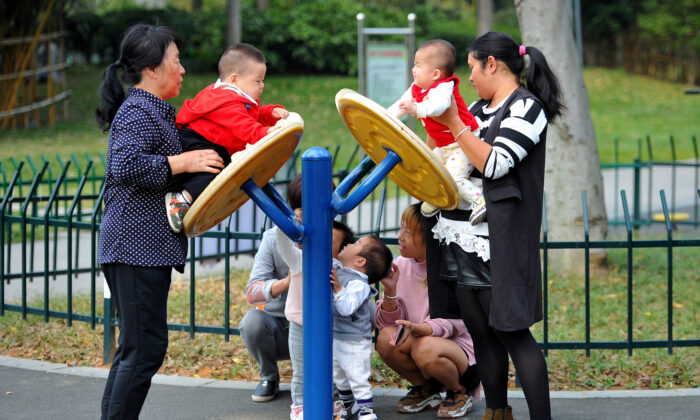 Beijing has admitted for the first time that China’s population will experience negative growth by 2025, according to an article from China’s National Health Commission, published Aug. 1 in Qiushi, a state-controlled magazine.

The article predicts that the declining population trend may prove difficult to reverse, with dire consequences for the country. Entitled “Writing a new chapter in population work in the new era,” it cites China’s low Total Fertility Rate (TFR) as the main reason for its slowing population growth. China’s TFR has fallen below 1.3 in recent years. For a country’s population growth to remain constant, the replacement fertility rate is generally considered to be above 2.1.

Chinese women are reluctant to have children, citing financial hardship, lack of child care, and career concerns as the main reasons, the article said.

As its birth rate declines, China’s aging population continues to grow. The article predicts that China will enter a stage of severe population aging around 2035, when more than 30 percent of the population will be over 60 years old.

According to public data, at the end of 2021, sixteen of China’s 31 provinces and municipalities had fewer permanent residents than at the end of 2020. Of the 287 Chinese cities above the prefecture level that released population data, nearly half saw their urban populations decline from 2020.

The National Health Commission article said that an aging population with fewer children will become the demographic new normal in China. It will inevitably lead to the continuing decrease of China’s working-age population and greatly hinder the funding of pensions.

In addition, China’s workforce is shrinking at an accelerated pace. According to China’s Ministry of Human Resources and Social Security, the country’s working-age population is expected to decline by 35 million between 2021 and 2025, a net annual decline of about 7 million.

A model by the Centre of Policy Studies at Australia’s Victoria University predicts that without changes to its pension system, China’s pension spending will increase fivefold, from 4 percent to 20 percent of its GDP, between 2020 and 2100.

The report “World Population Prospects 2022,” (pdf) released by the United Nations in July, predicts that China will see an absolute population decline as early as 2023. The report estimates that India will overtake China as the world’s most populous country by 2023. China’s population is predicted to fall to 1.317 billion by 2050, and India’s population will rise to 1.668 billion, about 350 million more than China’s.

Negative population growth will have a profound impact on China’s economy. The disappearance of the demographic dividend—economic growth that may result from a decline in a country’s birth and death rates—will trigger higher labor costs. The resulting shift of some low-margin, labor-intensive manufacturing from China to labor-rich countries like India, Vietnam, and Thailand will challenge China’s status as the world’s factory.

In 1979, the Chinese Communist Party (CCP) introduced a one-child policy, stipulating that couples could only have one child. As China used forced abortion and sterilization to enforce the policy, its birth rate began to drop.

Since then, the Chinese regime has relaxed its policy, replacing the one-child policy with a two-child limit in 2016, and a three-child limit in July of 2021. Meanwhile, provincial and municipal governments have introduced various preferential policies to encourage the birth of children, but these stimulus measures have had little effect.

Living under enormous social and economic pressure, many Chinese couples say they don’t want any children at all.

The findings suggest that even if the regime removes all birth control restrictions, China’s TFR would only be between 1.3 to 1.4, which is very low.

According to the National Health Commission report, people born in China in the 1970s have missed prime child-bearing age and are unlikely to have children, even if they want to. Those born in the 1980s and 1990s—only children faced with supporting elderly parents and the high costs of education, housing, and health care—are frequently deterred from having children by these factors.

The paper, titled “Simulation Analysis of the Negative Growth of China’s Population Inertia,” was published in 2020, in the sixth issue of the Chinese Journal of Population Science. It simulated the duration and impact of China’s negative population growth, using three scenarios of TFR recovery.

In the second scenario, China’s TFR doesn’t return to replacement level until 2050. Population inertia causes China’s population to continue to fall until 2102, when it will bottom out at 1.055 billion.

In the third scenario, China’s TFR returns to replacement level as late as 2080. The population will continue to decline, from a projected 988 million in 2080, to less than 900 million in 2110.

The analysis cautions that population inertia should be anticipated “when formulating population development strategies” and projects that China’s population will reach a minimum of less than 800 million around 2130.