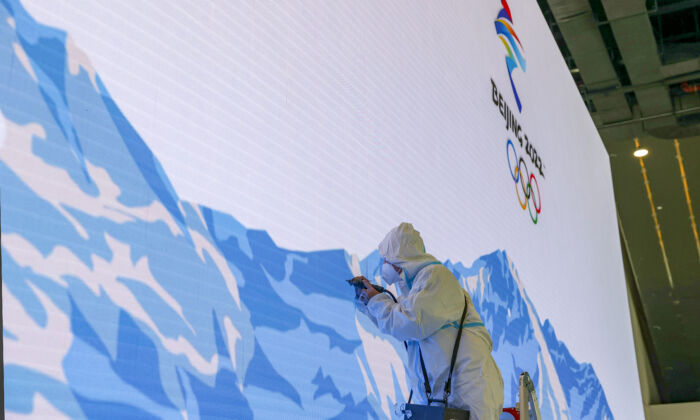 A worker makes repairs to a video wall at the Main Media Center, ahead of the opening ceremonies for the Beijing Winter Olympics in February, on January 9, 2022 in Beijing, China. (Katopodis/Getty Images)
Chinese Regime

A group of Chinese Olympians chanted a vow to compete in the upcoming Olympic Games for the glory of their motherland and their leader in Tiananmen Square in Beijing last week.

Led by Wu Dajing, a speed skater and a gold medalist in the 2018 Winter Olympic Games, the 100 or so Chinese Olympic athletes and coaches clad in thick dark clothing were shown in a video dated Jan. 25, vowing to do their best for the motherland and to not let the people down.

Two of the lines they chanted—“repay the leader with all our might,” and “following the General Secretary, going to the future together”—were deleted from the video clips broadcast by the Chinese Communist Party’s (CCP) mouthpiece CCTV on Jan. 25.

Youth Daily, another Shanghai-based CCP mouthpiece, used two lines of the oath as the title of a report on Jan. 26: “For the motherland, go go go! Not let people down, fight fight fight!” But below the title, the whole page was blank, with no actual report.

“The pledge doesn’t mean anything except that it reveals the Chinese sports officials’ intention to express their loyalty to the top leader,” Li Yuanhua, a former professor at Capital Normal University, said in a recent interview with the Chinese-language edition of The Epoch Times.

He said the oath reminds people of the Cultural Revolution when Chinese people showed their loyalty to Mao in a similar way.

During the Cultural Revolution in the 1960s, former CCP leader Mao Zedong’s personality cult was in its prime. Chinese people held the “little red book,” a publication containing quotes from Mao’s speeches and publications that was printed in a small size, could be easily carried, and was bound in a red cover, while dancing a collective dance called the “loyalty dance” that had set movements, to show their loyalty to Mao and Mao’s revolutionary line. The word “leader,” which represents Mao’s personality cult, has not been used since Mao’s death.

“The CCP officials don’t know any other way to express their loyalty to their current leader, so they just used the forms of expressing loyalty from their memory when they were young.

“The Olympic motto is ‘Faster, Higher, Stronger – Together,’ expressing a sports spirit to challenge oneself physically,” Li said, “but the CCP doesn’t have the sports spirit; it only uses sports as a political tool.”

Freelance journalist Ning Jing said that the Olympic spirit focuses on participation in the event, which advocates for peace and friendship.

“But the CCP turns the peaceful sports event into a war and asks its athletes to charge and fight,” Ning said in an interview with the Chinese-language edition of The Epoch Times, “the oath-taking video is both funny and creepy.”

“Sensitivity over describing Xi as a leader like Mao may explain the state media’s low-key coverage of that part of the athletes chants,” Bloomberg reported on Jan. 27.