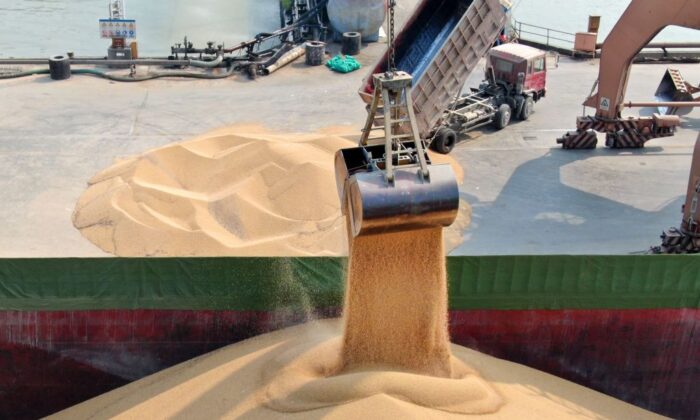 A crane loads soybean imported from Ukraine off a ship in a port in Nantong in east China's Jiangsu Province on May 10, 2019. (Xu Congjun/Future Publishing via Getty Images)
Thinking About China

China’s Grain Hoarding Contributes to the Rising Cost of Food

Global grain-trading strategies are currently in motion, thereby driving up food costs, while many profit at the expense of others.

One reason food costs are rising is China. China is stockpiling food commodities. In fact, as Russia was blocking trade routes, China was importing exports from those trade routes. It is rumored that 40 percent of April’s grain exports from Ukraine went to China.

As Bloomberg recently reported: “By mid-2022, the U.S. Department of Agriculture estimates that China will hold 69% of the world’s corn reserves, 60% of its rice, and 51% of its wheat.”

Those are astounding numbers. This is a bold attempt by China to increase domestic food security and reduce food reliance on the United States and Australia, but it also is a global and direct threat to every consumer.  Because China is hoarding grain, food prices will only continue to rise.

The evidence is now overwhelming, and the ripple effect can be felt worldwide. I’ve attached a chart visualizing the rising costs of food since 1913. As you can see, prices have been exponentially increasing over the decades—the last thing we need is this stockpiling by China.

The hoarding has been going on since last year, but at the time, many denied that it was happening. China’s neighbors, Japan for one, disagreed. As Nikkei Asia reported last year: “Less than 20% of the world’s population has managed to stockpile more than half of the globe’s maize and other grains, leading to steep price increases across the planet and dropping more countries into famine.”

Furthermore, as AgWeb reported in April of this year: “China made another large buy of U.S. corn to start the week, and market analysts say food security concerns are driving the country’s increased appetite for commodities. The USDA [U.S. Department of Agriculture] confirmed a flash sale Monday that totaled 1.020 million metric tons of corn by China: 680,000 tons of the purchase are for old crop, with the remaining 340,000 for delivery in the 2022/2023 marketing year. The purchase was on the heels of China’s largest corn purchase since May of 2021 last week, a purchase that totaled 1.084 million tons.”

James O’Brien, head of the U.S. State Department’s Office of Sanctions Coordination, also had a good amount to say about China, going on the record to state: “China has been a very active buyer of grain, and it is stockpiling grain… at a time when hundreds of millions of people are entering the catastrophic phase of food insecurity… It would have been much better to see that grain going to Egypt, in the Horn of Africa, and other places.”

O’Brien is right. Here in the rich world we are complaining about pricing, but the global poor stand the risk of famine.

What about supply chains? While there are still supply chain issues domestically and internationally, much of the havoc between 2020 and 2021 has been worked out. At the moment, we are largely dealing with runaway inflation on everyday products like crackers and rail freight. There seems to be no end in sight.

A recent report from Dan Kowalski, vice president of CoBank’s Knowledge Exchange, shared valuable supply chain insight: “Warehouse and inventory costs are still rising at near-peak levels, and transportation costs are rising at a much higher rate than pre-pandemic… Grain rail car availability and prices were at multiyear lows and highs, respectively, in the second quarter. Although as consumer purchases of goods continues to soften, supply chains will slowly recover.”

Meanwhile in China, food prices are feeling similar pressures. Yahoo reported that planning authorities for the Chinese Communist Party (CCP) are prepared to stifle pricing issues, stating: “The National Development & Reform Commission, a central planning authority, will use tools such as adjusting reserves,” it told representatives of pork and slaughter companies during a meeting, according to a statement released Monday. The NDRC also said it will work in coordination with other agencies to “severely punish illegal activities including fabrication and spread of information about rallying prices and price gouging.”

However, it was a different story in the China Daily, where it was reported that is was no issue whatsoever, stating that “China’s imports of grain are mainly to make up for the shortfall in domestic demand and not to hoard it. Actually, China’s grain imports in the first half of this year decreased by 5.4 percent year over year. China has also exported food and provided food aid to other food-deficit countries, contributing to global food security.”

Granted, the China Daily is controlled by the publicity department of the CCP, and owned by the CCP.

I know food prices will decrease and return to normal, but when is anyone’s guess. The U.S. price of rice alone was up 40 percent year over year in first quarter of 2022. But having one of the world’s superpowers hoard essential foods and food commodities certainly won’t help bring down food prices.

One can only wonder, then, whether the CCP is attempting to corner the market in multiple essential commodities as a strategic defense move to cripple consumers. The profits alone will fill up the communist coffers.