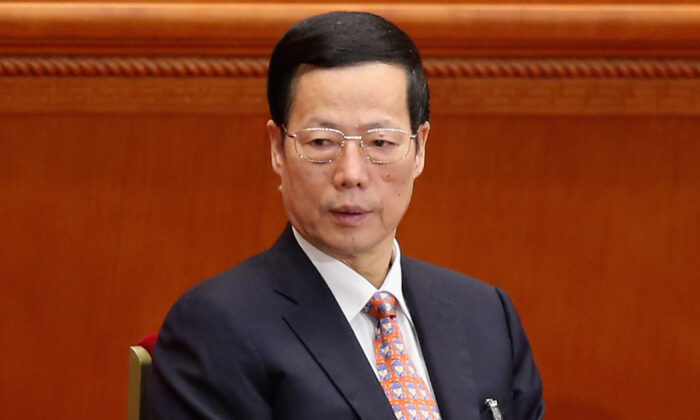 Zhang Gaoli, the former vice premier of the Chinese Communist Party’s (CCP) State Council, was recently accused of sexual assault against Peng Shuai, a professional tennis star who is 40 years younger than Zhang. Although Chinese authorities have been scrambling to block all related posts, more and more of Zhang’s alleged scandals are being publicized online.

On the night of Nov. 2 in a Weibo post, Peng alleged that she had nonconsensual sexual relations with the 75-year-old Zhang. Peng said that Zhang’s wife was aware of it and “stood guard outside” while Peng was sexually assaulted. The post was deleted 20 minutes later, but a screenshot of the post has been widely circulated in China and abroad. The General Administration of Sports, the CCP’s State Council, and official media held a rare unanimous silence on the matter.

The New York Times noted in an article that Peng’s post was quickly deleted, and even her name and the word “tennis” were not searchable, “reflecting the extraordinary sensitivity within China of discussing misconduct by party leaders.”

As early as 2004, the CCP’s Central Discipline Inspection Commission received several reports about Zhang’s debauched lifestyle and family corruption. However, Zhang claimed publicly that “lifestyle problems and extra-marital affairs are, after all, minor … I am against promoting a puritanical life,” according to Secret China, an overseas Chinese media.

In August 2015, when Zhang was the CCP’s secretary of Tianjin, a chemical warehouse in the port of Tianjin experienced two major explosions. According to the China Earthquake Networks Centre, the first explosion was as powerful as if three tons of TNT had detonated, and the second was equivalent to 21 tons detonating. The two explosions killed a total of 173 people.

On Nov. 3, the Central Discipline Inspection Commission published eight major corruption cases in Tianjin, some of which are related to the real estate development that Zhang promoted during his tenure as secretary of the Tianjin Municipal Committee.

Since the 18th CCP’s National Congress, a number of officials in Tianjin’s urban construction group, the largest state-owned enterprise in this city, have been arrested including Ma Baiyu, who was known as the “female head of urban construction” during Zhang’s administration in Tianjin.

Zhang was also involved in fraudulently financing private entity funds with $15 billion in Tianjin, according to Liberty Time Net, a Taiwan media.

Like most corrupt CCP officials, Zhang has transferred huge amounts of assets to Hong Kong and overseas through his family.

Listed in the Panama Papers—more than 11 million leaked documents from a Panamanian law firm—are many family members of Communist Party leaders who have set up companies and purchased properties in Hong Kong, and some of them even have permanent Hong Kong resident identity cards.

The Panama Papers detail financial information for more than 214,000 offshore entities. The papers were published beginning on April 3, 2016, when the International Consortium of Investigative Journalists and more than 300 reporters worldwide wrote a series of stories to expose the hidden infrastructure, political corruption, and the global scale of offshore tax havens.

Family members of at least eight of China’s current and former top-ranking political leaders appear in the Panama Papers as owners or shareholders of secret offshore companies.

Taiwan’s Apple Daily newspaper reported in 2018 that at least six current and former Standing Committee members owned properties in Hong Kong, most of which are owned by the family of Zhang, who purchased nearly $110 million in property under the names of his daughter Zhang Xiaoyan and her husband Li Shengpo. Li himself is listed in the Panama Papers as a shareholder of three offshore companies.

Zhang served in China’s petroleum industry for 14 years as a member of the once-powerful “petroleum gang”—part of former leader Jiang Zemin’s faction—to whom Zhang was very loyal.

According to a 2006 report by Hong Kong’s Apple Daily, the retired Jiang wanted to climb Mount Tai, so Zhang ordered Mount Tai to be “closed for two days” despite it being a public holiday. Zhang also asked local officials to “line up to welcome” Jiang as “the most beloved leader of the whole party, army, and country.” Zhang even specially prepared an eight-person palanquin to carry Jiang up the mountain, while Zhang followed behind.

Since July 1999, when Jiang launched the persecution of the spiritual practice Falun Gong, Zhang has closely followed Jiang’s genocidal policy. Zhang carried out the persecution in Guangdong Province, Shenzhen, Shandong Province, and Tianjin. He is suspected of committing the crimes of genocide and torture, as well as crimes against humanity, according to the World Organization to Investigate the Persecution of Falun Gong (WOIPFG).

On July 5, 2021, Wang Zhiyuan, the chairman of the WOIPFG, told The Epoch Times that he had spoken with Zhang by telephone on June 24, 2015. At that time, Zhang was on an official visit to Kazakhstan as a member of the Standing Committee of the Politburo of the Central Committee and Vice Premier of the CCP’s State Council.

Wang said that during the phone call Zhang indirectly admitted that Jiang was responsible for ordering the organ harvesting of Falun Gong practitioners—orders that Zhang faithfully carried out.