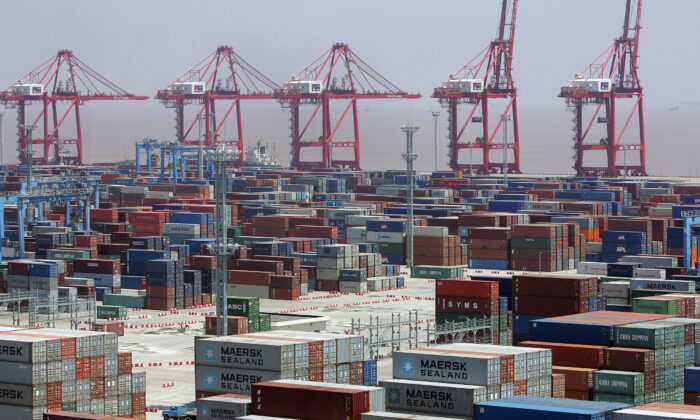 In the first four months of this year, China’s foreign exchange reserves continued to decline by more than $100 billion. The decline in April was the biggest drop since November 2016 nearly five and a half years ago.

At a press conference on May 7, the China Administration of Foreign Exchange claimed that the rise in the dollar index, the decrease in the amount of non-dollar currencies converted into dollars, and the changes in asset prices were the main reasons for the decline in the size of China’s foreign exchange reserves in April.

Data from the Statistics Bureau of the Chinese Communist Party (CCP) show that, in the first four months of this year, foreign trade exports, an important source of China’s foreign exchange, continued to decline.

In the first three months of this year, the new orders index of China’s manufacturing exports was 48.4 percent, 49 percent, and 47.2 percent, which continued to be below the 50 percent boom-bust line; above 50 percent indicates an increase in prosperity, and vice versa a contraction. By April, the index had plummeted to 41.6 percent—a 5.6 percentage point drop from March.

According to the regime’s customs data, China’s merchandise exports in April this year amounted to $273.6 billion, an increase of 3.9 percent from a year ago, and far below the 14.7 percent year-on-year increase in March and new low since June 2020.

Sun said that in this wave of lockdowns, China’s economic centers such as Shanghai and Ningbo have suffered a huge blow. Places like Shanghai are only emerging from lockdown in June, so China’s economic data for the second quarter of this year is sure to be very poor.

Shanghai Port and Ningbo Port are among the top three container ports in the world in terms of traffic. Sun said that last year, the two ports saw a large backlog of goods that could not be shipped out, and empty containers were difficult to find. Costs for container freight from China to the west coast of the United States exceeded $30,000.

But by now, according to his understanding, the two terminals have piled up a large number of empty containers, and the cost of container freight to the U.S. west coast has fallen to a little over $7,000.

At the same time, China’s purchase costs continue to increase due to high international commodity prices. The CCP’s massive purchases to hoard commodities, especially of food and energy, could be an important factor in the decline in China’s foreign reserves.

In the first four months of this year, China’s grain imports amounted to $25.8 billion, an increase of 24 percent compared to the same period last year ($20.8 billion).