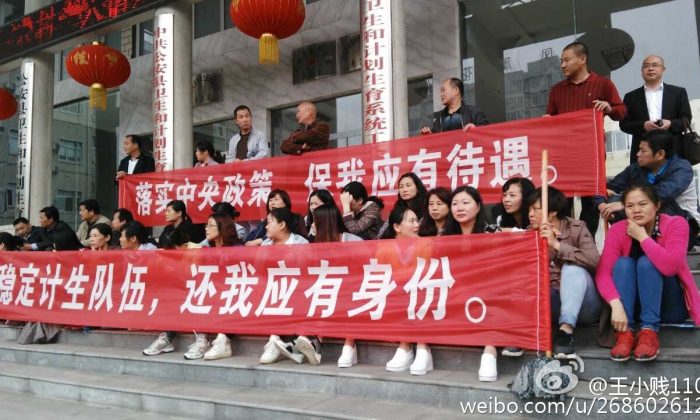 While reforms made to China’s infamous one child policy have made it legal to have two children per household, not everyone has welcomed the changes.

In late May, dozens of officials from the local family planning bureau in Gongan County of Hubei Province demonstrated on the steps of the bureau office to protest their meager income, which can no longer be supplemented by collecting fines from parents caught violating the draconian reproduction laws.

“Now I can only get a cold 1,950 yuan [less than $300],” wrote one Gongan County official on his Sina Weibo social media account to lament his base monthly wage.

But in slogans emblazoned in white lettering on red banners, the disgruntled family planning personnel made no mention of the fines. “The family planning policy is still a state policy, give me the treatment I deserve” and “maintain the family planning authorities’ stability, return my deserved prestige,” the banners read.

During the days of the 35-year one child policy, which started in 1980 and was ended late last year, family planning officials became notorious for enforcing the ordinances nationwide. They administered hefty fines, sterilizations, and forced abortions.

In an interview with The Paper, a state-sponsored news media in Shanghai, one family planning manager, surnamed Li, mentioned that a certain percentage of the fines would be “returned” to staff in order to “bring positive motivation to the family planning officials.”

The general public has not been sympathetic to the officials’ misfortune. Nor are they pleased that the heavy fines they were made to pay for violating the policy, ostensibly “social support fees,” have in many cases found their way in the pockets of the family planning staff.

“So it turns out that the social support fee was there to support this mass of so-called ‘personnel’ who do inhuman work,'” one angry comment reads. “These mouths do not create value with their own hands, but work by going against their consciences. How can they have teh face to post on Weibo?”

Another user describes the lengths to to which the family planning officials would go to make sure the fines were paid: “In earlier years, they seized land belonging to rural families who exceeded the familiy planning limits; they tore down homes and robbed people of their wares, down to the last piglet. … To call this karmic retribution would not be excessive, and anyway, a wage of 1950 yuan is not that bad.”

Behind the ‘Social Support Fee’

The “social support fee” was originally called the “violation of designated family planning limit fine.” It was officially put into execution starting September 2002. Since 1980, family planning bureaus across China have collected a total of 1.5 to 2 trillion yuan ($228 billion to $300 billion) in fines.

State figures indicate that by the end of 2005, about half a million people were employed by the population and family planning authorities in a system that cost over 80 billion yuan (about $12 billion) annually.

According to a Chinese state spokesman in 2002, the social support fee is not a fine but rather an “economic compensation to society” to pay for the public resources needed to pay for children unwanted by the family planning authorities.