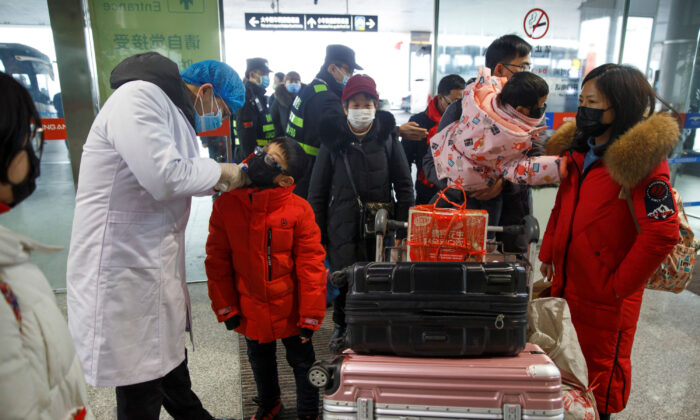 A medical official takes the body temperature of a child at the departure hall of the airport in Changsha, Hunan Province, as the country is hit by an outbreak of a new coronavirus, China, Jan. 27, 2020. (Reuters/Thomas Peter)
By Edward Cheng

China’s economy grew by 6.1 percent over 2019, official data showed on Jan. 24, being the lowest annual growth in almost three decades.

The slowing growth rate, which sits within the lower bound of the official target of 6 to 6.5 percent, was a drop from 6.6 percent in 2018. It came amid increasing pressure from a weak labor market, the US-China trade war, sky-rocketing meat prices, and domestic banking jitters.

While there are tentative signs that the world’s second-largest economy is starting to stabilize, analysts expect the escalating coronavirus outbreak to put additional strain on growth.

Fixed asset investment increased to 5.4 percent over 2019 with the increase particularly noticeable in the manufacturing sector. Industrial production, year-on-year, also increased from 6.2 percent to 6.9 percent, above market expectations.

The cooling of trade tensions with the United States with the signing of the “phase one” trade deal will also likely serve to ease pressure on the Chinese economy. However, it is unclear whether this is only a temporary reprieve as analysts remain skeptical over whether the Chinese regime will follow through on the agreement’s ambitious commitments.

“Despite the recent uptick in activity, we think it is premature to call the bottom of the current economic cycle,” Julian Evans-Pritchard and Martin Rasmussen at Capital Economics said in a note.

“External headwinds should ease further in the coming quarters thanks to the ‘Phase One’ trade deal and a recovery in global growth. But we think this will be offset by a renewed slowdown in domestic demand, triggering further monetary easing by the People’s Bank.”

The slowdown will place increasing pressure on authorities to stabilize the economy and to achieve their goal of doubling the size of the economy in 10 years. Any further downward pressure will place this goal at risk.

As more stimulus becomes necessary it is unclear whether Chinese authorities will be able to stimulate growth without fueling debt and breeding financial instability.

This likely reflects the increased support needed by local areas as revenues fall from lower taxes and the slowing economy. These measures may not be enough with already two-thirds of China’s provinces shaving their 2020 growth targets.

Coronavirus to Subtract 0.5-1 percent From GDP

The outbreak of the coronavirus is another cause of concern for the Chinese economy. As officials scramble to contain the outbreak, placing travel restrictions on over 35 million people, economic activity will likely grind to a halt in some areas.

The effects on growth will be particularly pronounced with the virus coinciding with the Lunar New Year, where people would usually increase spending on travel, gifts, and entertainment.

The Economist Business Intelligence Unit estimates that the coronavirus could subtract China’s economic growth by 0.5-1 percentage point. Their modeling is based on the SARS outbreak in 2002 to 2003 which led over 5,000 reported cases and 349 deaths in China alone. Other analysts also predict a similar reduction in growth from the virus.

However, unlike the early 2000s, China’s economy is not the engine it once was. To achieve their growth target the Chinese government will likely have to inject more targeted stimulus, but if it has enough ammo to ride out this headwind remains to be seen.