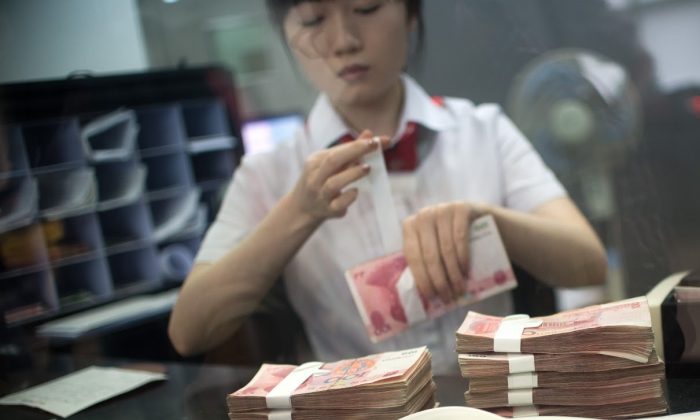 A worker of an Industrial and Commercial Bank of China Ltd (ICBC) branch counts money as she serves a customer on September 24, 2014. (JOHANNES EISELE/AFP/Getty Images)
Business & Economy

It doesn’t mean China will do anything about it, but the central bank governor Zhou Xiaochuan said on March 20 that corporate borrowing is “on the high side.”

This statement is a bit of an understatement because corporate debt is higher than 160 percent of GDP, or higher than in any other country according to the Bank for International Settlements.

There is no end in sight to bond issuance either. Chinese corporates have issued almost 5 trillion yuan ($770 billion) worth of bonds in the first two months of 2016, more than half of the 2015 total of 8 trillion yuan ($1.23 trillion). The total stock at the end of 2015 was 21.6 percent of GDP according to investment bank Société Générale.

But as China tries to juggle a couple of different debt balls, corporate bonds are coming under more and more pressure.

“The corporate bond market is becoming increasingly vulnerable. In addition to supply risk, we see two other possible triggers for accidents in the domestic credit market, which would have unpleasant implications for banks,” the investment bank wrote in a note to clients.

One of the reasons is actually good news. Because stocks have stabilized and real estate prices are rising, Chinese retail investors may scale back their bond investments and put the money into stocks and real estate again.

The other reasons are increasing corporate defaults, a new phenomenon for Chinese investors. Before 2014, Chinese companies just didn’t go bankrupt. Now they do, and even though the amounts are still small, this could change relatively quickly.

“At some point, the market reaction to credit events could turn more negative,” wrote Société Générale, especially as many companies are issuing new debt merely to repay existing obligations.

One sign the market is taking default risk more seriously is the relative increase in yield of the popular wealth management products, which are often just repackaged corporate bonds or bank loans.

Their yield went up over 2015, signaling increased risk but the yield of higher-rate securities actually went down. It is safe to say that the opaque wealth management products contain the least-safe bonds and, therefore, should react first to market risk, similar to the junk bond market here in the United States.