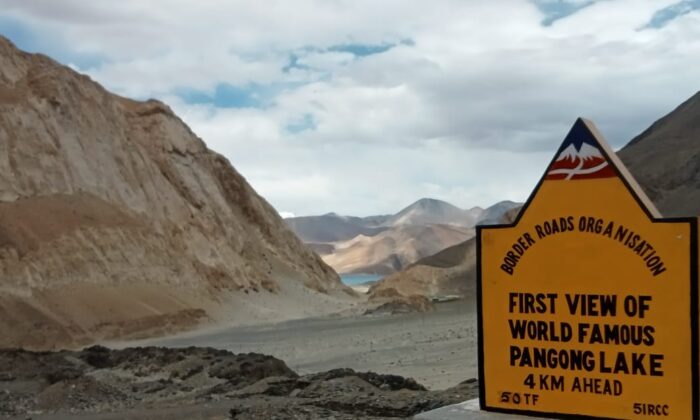 The first view of the Pangong Tso, the point from where the strategic lake starts in India and goes 134 kilometers, more than half of which is in China where it ends. The lake has been a site of heavy military buildup on both sides. This picture was taken on June 22, 2021, a few miles away from the first tourist camp point. (Venus Upadhayaya/Epoch Times)
International Relations

NEW DELHI—The Chinese military is nearly done with building a bridge on the Pangong Tso lake in the disputed border area between India and China in the Ladakh region. The Indian government says the construction is occurring in areas illegally occupied by China.

Pangong Tso is a high-altitude, trans-Himalayan lake that is more than 83 miles long. Half of the lake is claimed by China, 40 percent by India, and a six-mile area is claimed by both nations.

Reports of the People’s Liberation Army (PLA) building a bridge to connect the north and the south banks of the lake to facilitate the movement of troops and equipment emerged earlier this year.

“This bridge is being constructed in areas that have continued to be under the illegal occupation of China since 1962. … The government of India has never accepted this illegal occupation,” the Indian government stated in a written reply to a question asked in the Lok Sabha, the legislature’s lower house.

Aksai Chin, where the bridge is located, is a territory administered by the Chinese regime through its regional authorities in Xinjiang and Tibet. The area also is claimed by India as part of Ladakh, the eastern portion of the Kashmir region that has been the subject of a decades-long dispute between the two countries.

The area is largely unpopulated but has military significance because of the only route that links the Tarim basin in far west China’s Xinjiang region with Tibet. China began building a road through Aksai Chin in 1956 and has occupied the region since 1962, following the first Indo–Sino war.

China has completed a significant amount of construction within Indian territory since 1962, which was “ignored completely,” Abhijit Iyer-Mitra, a senior research fellow at the Institute of Peace and Conflict Studies, told The Epoch Times. However, the addition of the bridge is concerning because it changes the “military balance,” he said.

The bridge is south of the PLA’s position on the north bank of the lake and is being built where the two banks are only 1,600 feet apart. That cuts the distance between the PLA’s north bank position and another important Chinese base by 93 miles.

“When they bridge the north and the south shores of the Pangong, they can essentially move tanks and armored vehicles and logistics very quickly from one side to the other side and things like that. It gives a certain mobility advantage. That’s something that changes the fundamental balance of power; the localized balance of power out there,” Iyer-Mitra said.

He said that the bridge construction was a longtime Chinese plan, noting that the PLA would have had to spend billions of dollars to bring all the construction equipment up to the 14,000-foot altitude of the trans-Himalayan lake.

Srikanth Kondapalli, a professor of Chinese studies at Jawaharlal Nehru University in New Delhi, said that after the 10th round of military talks between India and China last year, both sides had decided to disengage their forward deployment of troops from the north and the south banks of Pangong Tso.

“Now, with the bridge, the PLA troops could be deployed swiftly. So that’s seen as a threat by India,” Kondapalli said.

Indian Defence Minister Rajnath Singh told the Indian Parliament in February 2021 that, as part of the military disengagement, both countries would withdraw to their earlier positions in a “phased, coordinated and verifiable” way. With the construction of the bridge, China is sending a clear message that it doesn’t want to disengage, experts say.

The goal of the regime in Beijing is to create large permanent infrastructure in these high-altitude disputed regions to bolster its territorial claims against India, Iyer-Mitra said. By building more significant structures, Beijing can claim “it then becomes irretrievably Chinese territory,” he said.

How Will India Respond?

India has neglected infrastructure development along the border over the past seven decades and only started to catch up in 2019, he said.

“If you start building railways and bridges and things like that—all ground forces get very panicked because they are like this is an imminent attack,” he said, noting that building military infrastructure on the ground would mean that India is giving targets for the Chinese to attack.

India’s response should be focused on building air warfare capacities, he said, giving it the ability to bomb Chinese ground infrastructure if necessary. Meanwhile, India should continue building non-military infrastructure at a rapid pace on its side so that China’s “salami-slicing” strategy—its incremental grab of disputed land—can be stopped permanently, he said.

Meanwhile, along with the infrastructure upgrades and troop deployment, India should work toward intensifying its patrolling efforts along its entire boundary with China, according to Pathikrit Payne, a New Delhi-based research consultant on geopolitical affairs who specializes in the management of defense technology.

SSB is one of the five central armed police forces of India that were set up in 1963 in the aftermath of the Indo–Sino war in 1962.

“Similar enhancement of ITBP strength is in the pipeline but needs to be expedited given the rising possibility of Chinese intransigence, as part of its Five Fingers of Tibet policy, which is not going to go down any time soon,” Payne said.

The Five Fingers of Tibet is a foreign policy imperative attributed to the late Chinese leader Mao Zedong that considers Ladakh, Nepal, Sikkim, Bhutan, and Arunachal Pradesh to be part of Tibet’s traditional lands, and considers it China’s responsibility to “liberate” them.