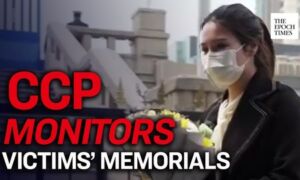 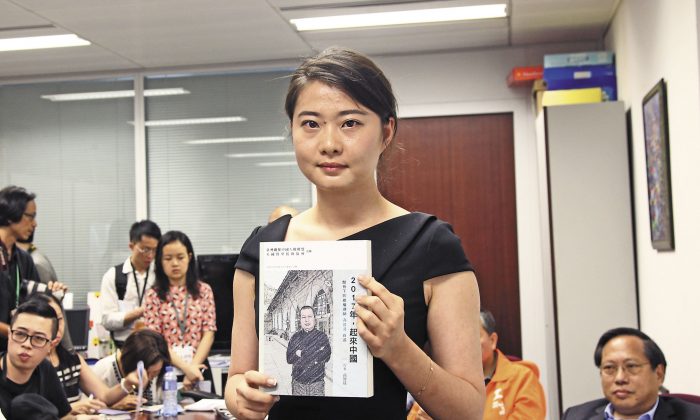 Reputed as the “China’s conscience,” renowned human rights lawyer Gao Zhisheng launches his new book, written when he was under house arrest by the communist regime in China.

In addition to the details of his savage torture and persecution by Zhou Yongkang, an ex-member of Politburo Standing Committee and cohort of Jiang Zemin, Gao’s new book also predicts the collapse and demise of the Chinese Communist Party in 2017.

The 500,000-word book, whose Chinese title translates to “Year 2017, Stand Up China- A narration by Gao Zhisheng, a human rights lawyer under torture,” was launched by his daughter Grace Geng, under the accompaniment of Albert Ho Chun-Yan, Chairman of China Human Rights Lawyer Concern Group (CHRLCG) at Hong Kong Legislative Council.

Grace, who asserts that her father’s conviction is firm despite still being under close supervision, longs for his freedom.

In his book, Gao describes the torture during his detainment and imprisonment, and discusses his observations of the development of China. Furthermore, he predicts in the book the fall of the Communist regime in 2017, after which a transitional democratic constitutional government will run the country.

As one of her father’s new book’s first readers, Geng says that the read made her heavy-hearted but gained her more respect for her father.

“I think he is a very strong person; I am very confident that my father is one of the most sober men this era in China. He and those striving (for the betterment of China) are the glory of China today and the hope of China tomorrow. I am proud of them.”

Geng stresses that the book’s prediction that the Chinese Communist Party will collapse in 2017 is her father’s unwavering message to the world.

“My father believes this is God’s message, and I believe my father.”

Gao hopes that this book will be an inspiration for the future China, Geng said.

“There are some friends who are concerned about the future development of China, (and he) hopes to give them some insightful recommendations. He also hopes that after reading this book, we can make plans for the future. He says that a great nation is finally standing up, and when that happens, we will become a positive force for human civilization.”

Righteousness the force to face the CCP without fear

Geng has great admiration for her father for what he has suffered over the years for speaking out against the persecution of vulnerable groups including Falun Gong practitioners and human rights lawyers.

“To him, for whatever he thinks is right, he is prepared to bear the consequences. I think what is important is to have no fear, if it is right, if it is something righteous, be persistent and finish it.”

Geng has not seen her father for seven years. Over the past nine years, her family has been living under the shadow of CCP’s supervision. Gao is currently under house arrest in a remote village in Shaanxi, staying with his farmer brother. He is only allowed to walk in the yard, occasionally helping out in the fields. Geng reveals that he is in a good health, and recovering gradually from the injuries due to physical torture during his custody. However, his teeth are still weak, and he could only take fluid food. CCP does not allow him to seek treatment or have a medical checkup in the larger cities.

She estimates that 7 to 10 men directly or indirectly monitor her father every day, so that he is isolated from the outside world. She would have to contact him through his brother’s phone when surveillance personnel are not present. When Geng last talked to Gao about one and a half months ago, he was mainly concerned about her studies.

Insisting on staying in China, “he is very great“

“I cried when I arrived in Hong Kong the night before. Seven years and this is the first time I am so near father,” Geng said.

Breaking loose from the CCP’s strict monitoring and suppression, Geng, her mother and her brother Peter Gao escaped in 2009 and sought refuge in the United States.

She explains that her father had decided not to go to the US long ago, choosing to stay in China.

“He was crying when we discussed this,” Geng was emotionally in tears, saying, “I really did not understand then why my father could not be with us, but after some time I think his decision is actually very great. He loves the Chinese people too deeply; he loves the Chinese people very much, so much that he can put his family aside. I think he is very, very great, and I’m very proud of him.”

Geng hopes her father is in good health and will regain freedom soon. Her Father’s Day wish is to see him lead a normal life in China.

She adds that her father wants to witness the change of China’s future. “I believe that he is mentally prepared, no matter what may come, he is able to bear it.”

Geng believes her father is the most sober man in modern China. For the land he loves, he is willing to sacrifice everything for China’s betterment, and has the determination to die for it.

Geng says that her mother was the first to get hold of the first draft of her father’s book, but could not pluck up the courage to read it.

“Every time I asked her why she did not read, she would be in tears, but she just would not read it, stubbornly would not read it. I believe however heartbroken she is, she still respects and supports my father’s choice [not to leave China].”

Book launch in Hong Kong and Taiwan is significant

She urged the Hong Kong people to speak up for her father. She went on to Taiwan to promote the book after her stay in Hong Kong.

In view of the sensitive contents of the book, there is a great possibility that her father might be arrested again and even tortured to death by the authorities. But Geng Ge said, “My father is fully prepared. Nothing daunts him.”

Encourage the young generation in Hong Kong not to fear CCP

Geng Ge urged the young generation of Hong Kong not to fear the CCP. “Hong Kong is relatively free. We should promote the real understanding of China. Such is the duty of the young people in Hong Kong.

“We’re the people of China. No matter what kind of life we lead, if the government is no good, it’ll affect us in one way or another. So if you don’t come forward to do something about your life or your job, nobody will do it for you”.

52-year-old Gao Zhisheng is one of the famous human rights lawyers in China. Since he started practice in 1996, he has been speaking up for the disadvantaged groups. After Jiang Zemin and his cohorts started persecuting 100 million Falun Gong practitioners in 1999, Gao wrote to the authorities in 2004 and 2005 three times to expose the persecution and call for the atrocities to end.

In March 2006, the harvesting of Falun Gong practitioners’ organs at the Sujiatun district of Shenyang came to light. Gao Zhisheng stated in public that he would look into the matter. In June 2006, Ex Canadian Senator and Secretary of State for Asia-Pacific (2002-2003) David Kilgour and international human rights lawyer David Matas made multiple requests to enter China to investigate the case. Gao tried to help by sending invites from Beijing. Investigation by Kilgour and Matas outside China proved that the CCP is harvesting the organs of Falun Gong practitioners on a national scale for money. The European Parliament and the United States House of Representatives have passed the resolution to call for the CCP to stop the crime.

As a result of Gao speaking out, he became the target of the Jiang Zemin faction and ex-Politburo Standing Committee member Zhou Yongkang. Since 2006, he has been detained and tortured numerous times. When he was released from prison on 7 August 2014 after serving a three-year jail term in a miscarriage of justice, his memory became poor and he could barely speak.

In the book, Gao gave an account of how he was kidnapped in 2004, 2006 and 2009 by the CCP multiple times and stated that the order came from Zhou Yongkang. In 2011, Zhou sent men to ask him how long he could take the torture. He answered, “I can live until 94. Please ask Zhou Yongkang who will have the last laugh. If he’s lucky, he’ll die in prison!” Zhou was put under investigation by Xi Jinping in July 2014 and was given a life sentence on June 11, 2015.

Gao also talked about the operations of the high authorities and the Central Government Leading Group for Stability Maintenance in his book. “An officer once said there are as many as a few tens of thousands of special cadres planted in all the Domestic Security departments across the country. Their duties are to look out for hot topics or sensitive issues on the Internet and give instructed ‘public opinion’. The purpose is to stir up trouble, create ‘mainstream public view,’ attack people who speak the truth and supervise the trend on the Net.”

Year 2017: Stand Up China has been published in Taiwan. Orders can be placed on www.books.com.tw. The e-book has also been launched and the English copy is being prepared for print.

Gao Zhisheng is reportedly missing again after the release of his book.

Nominated by China’s Ministry of Justice as “10 best lawyers”.

Nov 4, Law firm ordered to close for a year; Gao continues to investigate on the torture of Falun Gong practitioners in Shandong, Liaoning, Jilin and other provinces.

Dec 12, Sends third open letter to the leaders of CCP, titled “Barbarous actions annihilating our nation’s conscience and morals must be stopped immediately”.

March, CCP’s mass harvesting of Falun Gong’s practitioners’ organs for sale was in Sujiadun, Shenyang city,Liaoning is exposed. Gao declares he will participate in the investigation and sends not invitation letters. His efforts help trigger independent investigation in the international community.

Dec 22, Charged with “subversion of state power”, sentenced to three years’ probation, five years imprisonment, and striped of political rights for one year.

Sep 21, Kidnaped by National security police of Beijing and tortured for more than 50 days, tortures include beating with electric baton (until the whole body was purplish grey), smoking of eyes, electric shock, piercing of genitals with bamboo picks; Gao fainted several times during the torture.

April 7, Gao is arranged to have a brief meeting with the outer world after disappearing for over a year, after which Gao disappears for another 20 months; Geng He reveals that Gao is imprisoned in an underground cell in one of the army camps, and suffering severe tortures.

Aug 7, Released from Shaya prison; under house arrest since with heavy surveillance.

Translated by SQ Wu and Sulin.