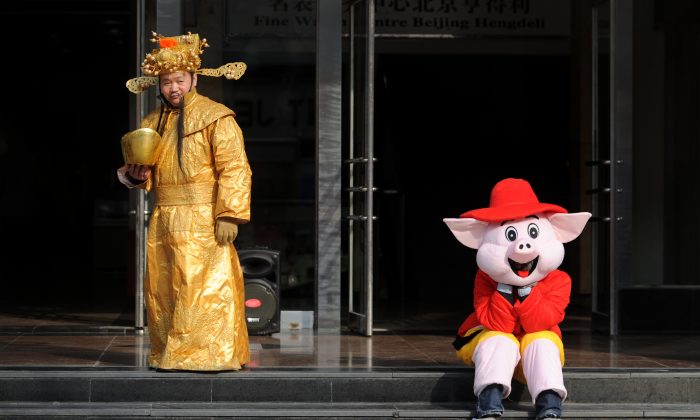 A sales man (L), dressed as the god of wealth, waits for customers with his partner (R) dressed as a cartoon character at the entrance of a shop in Beijing on March 22, 2013. (Wang Zhao/AFP/Getty Images)
Business & Economy

Especially the Chinese central bank (PBOC) was very adept at managing small or large glitches in China’s planned economy, at least until recently and without worrying about the long-term effect. In 2016, however, managing the economy and the exchange rate became too tall of an order.

So the PBOC leaked documents to the press saying it can’t do everything at the same time, like keep the yuan from falling and stimulate the domestic economy.

He also said the PBOC won’t use the market’s preferred measure of stimulus, a cut in the required reserve ratio, which gives banks more room to lend and expand credit in the economy.

“A cut in the required reserve ratio would be too strong a signal [to send to the market], and we can use other tools to provide the market with liquidity,” he said.

The PBOC finally realized that it too is subject to the law of the impossible trinity, which says you can only have two out of the three following treats: an independent monetary policy, a stable currency, and an open capital account.

So according to the leaked memo, later confirmed by the official minutes, the PBOC chooses to have a stable currency and consequently must import the Federal Reserve’s tight monetary policy.

But the options here are not black-and-white given China’s recent push for reform.

First of all, China’s capital account is neither completely open nor completely closed. While there are many restrictions, like the maximum $50,000 an individual can transfer out of the country every year, those limitations are violated on a daily basis and to a larger degree by multinational firms and wealthy individuals with political connections.

At the same time, China is not keeping a strict peg to the dollar anymore, like it did until 2005 and it is still the case in Hong Kong. The reform goal is to have a freely convertible currency by 2020.

China is rather managing a gradual decline in the rate. If China is serious about having a floating exchange rate by the end of the decade, it will have to open the capital account even further.

Once the capital account is open and the exchange rate floated, the PBOC can then manipulate domestic monetary policy as it pleases.

But even if the PBOC chooses to emphasize a stable exchange rate for the time being and the capital account is semi-closed, it still has different tools for domestic monetary policy as well, like not using the required reserve ratio and instead using open market operations. Just recently, it injected around $250 billion dollars into the banking system with this method, a method that also has a negative effect on the exchange rate, although the PBOC hopes it is a less pronounced one.

But no matter which of the blurred options the PBOC chooses, it can only manage expectations in the short term. It won’t be able to solve the fundamental problems of the Chinese economy, which require serious reform—a fate it shares with all other central banks.